Brazil win ugly as Neymar ruled out of World Cup 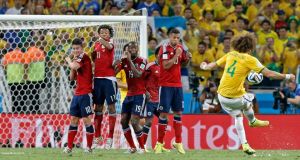 Brazil’s David Luiz scores his side’s second goal from a free-kick against Colombia during the World Cup quarter-final at the Arena Castelao in Fortaleza. Photograph: Tolga Bozoglu/EPA 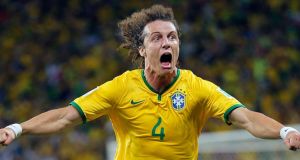 David Luiz celebrates after scoring his side’s second goal from a free-kick against Colombia during the World Cup quarter-final at the Arena Castelao in Fortaleza. Photograph: Sergey Dolzhenko/EPA 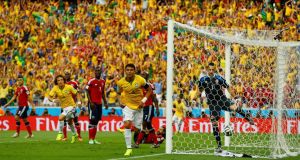 It was a supremely ugly win for Brazil, but one they will have been delighted with before the crushing news that Neymar, the player they most rely upon, will play no further part in the tournament after he suffered a fractured vertebra.
With Thiago Silva also ruled out of next Tuesday’s semi-final against Germany in Belo Horizonte after picking up a second yellow card here, the hosts will be without their two most important players just when they needed them most.
It was a bad end to what had been a surprisingly trouble-free night. For once in this World Cup the experience of playing in front of a raucous home crowd was a help rather than a hindrance, as a bafflingly timid display by referee Carlos Carballo helped them outmuscle a Colombia side that looked every inch quarter-final first-timers – or at least unwelcome guests.

With 10 minutes left James Rodriguez scored his sixth goal of the tournament from the penalty spot after Julio Cesar had taken down substitute Carlos Bacca, and so the end of the game was played out in a cauldron of nervousness, as Colombia attacked freely and Brazil were knocked back on their heels. Juan Cuadrado and Adrian Ramos came close with headers, but Brazil’s two goals had been enough.

It took Carballo more than an hour to book a player, and by that stage, after a highly promising and open first half, the game had become nasty and fractious from repeated fouling. That pattern suited Brazil far better, their muscularity effectively neutralising Colombia’s creative talents. The irony in the end, of course, was that in the most physical part of the contest it was Neymar who suffered most.

Although he got on the scoresheet, it was a difficult night for Rodriguez, who was repeatedly fouled and then had the indignity of being booked after giving away the 68th-minute free kick from which David Luiz gave Brazil the two-goal advantage. It was Rodriguez’s tears, rather than Brazil’s for a change, that told a story at full-time, and it was a touching sight to see Luiz and his team-mates console the youngster on the pitch.

The quirkiest statistic going around – and also a telling one – was that the last time Colombia beat Brazil, 23 years ago, Rodriguez was one day old. José Pekerman has been widely praised for giving this generation confidence – even reminding them to “have fun”, Juan Zuniga had suggested – and Colombia’s sense of wellbeing had been enhanced by just one defeat in 16 matches.

Nonetheless, this was their first World Cup quarter-final appearance, against the hosts, who they had only beaten twice in their history. And the crowd in Fortaleza was manic, starting with an incredible noise in the warm-up by Brazil’s goalkeepers a full 50 minutes before kick-off, and featuring some pantomime booing at the mention of Rodriguez.

All told, the last thing Colombia needed was to give the home side the momentum of an early lead. And quite a soft one it was too. A quick Fernandinho pass forward left Cristian Zapata exposed one-on-one with Neymar, and the goal came from the corner he was forced to concede. Neymar whipped it in, the ball just missed the top of Luiz’s head, but Thiago Silva was running in at the back post to steer it home.

The crowd went even wilder and Brazil, by their standards in this tournament, seemed inspired. The rest of the half was open, at least if you were coming from the Brazilian camp. If you were Colombian, you would have feared being swept away. When Felipe Scolari had suggested that Colombia were better opponents for Brazil than Chile’s dogs of war you were sceptical, but it began to become apparent what he meant. He meant that Brazil would be able to bully them physically, which they did.

With Luiz Gustavo suspended, Fernandinho had been picked for the holding role – and effectively the job of looking after Rodriguez. The Manchester City player is not a specialist there, but he was mobile and tough – or, if you like, dirty. It was hard to credit that Carballo did not book him for a bad body-check on Rodriguez after 14 minutes, and he was given licence for unpleasant fouls on Colombia’s star man for the rest of the match.

Pekerman had praised the “balance” of his side, but it wasn’t quite to his liking for this challenge and he made two significant changes to the side that beat Uruguay. In came midfielder Fredy Guarin in place of Abel Aguilar, and Victor Ibarbo replaced left-sided attacker Jackson Martinez. Ibarbo was up against Maicon, surprisingly chosen by Scolari for a first tournament appearance ahead of Dani Alves.

It was Cuadrado who came closest to equalising for Colombia just minutes after Silva’s goal, his shot flying low past the post. But the dominant theme was the discomfort of the Colombian defence, who didn’t much enjoy the directness of Brazil or the experience of Neymar, and Hulk especially, running at them. If Fred had been a real player in the first half they might have done some damage.

A Hulk one-two with Neymar almost led to a goal, and another shot from Hulk from the left caused panic. Paulinho would have been in if he had quicker feet, and as the roar of the crowd rose Colombia were clinging on. For a time the game became delightfully open, but it was always Brazil with the bigger punch. A Neymar free-kick just on half-time just skimmed the bar and there was great promise for a riveting second half.

Instead, the entertainment went straight past dull to horrible. Foul after foul broke up the flow and Brazil were perfectly positioned to capitalise. They did so with Luiz’s excellent free-kick, hit from 25 yards, which dipped so early that you felt David Ospina might have kept it out. The stands roared and Brazil seemed home and dry.

After Rodriguez did his business from the spot, and the clock ticked down, they were.