Bierhoff confident of victory over Ireland despite loss of injured players 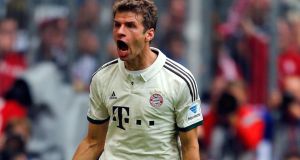 Germany team manager Oliver Bierhoff believes the goalscoring form of players like Thomas Mueller can offset the lack of strikers in the squad for the game against the Republic of Ireland. Photograph: Michael Dalder/Reuters

Team manager Oliver Bierhoff expects Germany to qualify for the World Cup with a victory over the Republic of Ireland in Cologne this Friday despite a slew of injury problems.

Germany coach Joachim Loew will be without his starting strikers Mario Gomez and Miroslav Klose as well as defender Marcel Schmelzer, twins Sven and Lars Bender, Lukas Podolski and offensive midfielder Marco Reus among others.

Former international striker Bierhoff still believes that Germany will prove too strong for Noel King’s side at the Rhein Energie Stadion and get the three points to wrap up Brazil qualification ahead of their final game against Sweden next Tuesday. Germany only need two points to confirm their place in next summer’s World Cup.

“Anything other than automatic qualification against Ireland would be disappointing,” Bierhoff told a news conference in Dusseldorf. “Despite the injuries, we have to be ambitious enough to dominate the game and win it.

“We always hope that in the autumn to have all players fully fit but there are times when players are stretched every three days with matches.

“Those who have been playing continuously are fully fit but the bad thing is that some (footballers) are missing because demands on players have been high during the past weeks.”

Bierhoff also brushed off criticism that a lack of attackers could be a problem, with Max Kruse the only designated forward in Loew’s squad.

“We are missing about nine players but I did not sense any panic among the coaches. I only saw the trust in the players that we know well.

“What is important is to fill the positions and we have alternatives like Thomas Mueller, who has shown this season how dangerous he is up front and Max (Kruse) is also as a forward.”

For Bastian Schweinsteiger, who will reach 100 caps if he plays in both games, a win over Ireland would be the first step towards winning that elusive first international trophy with Germany since 1996.

“It is my aim to become the best team in the world,” said the midfielder, who returns after missing the last few matches, through injury.

“Hundred caps is not something you expect to happen. I hope to play many more matches and enjoy success.”

1 Born to ride, born to win: Sam Bennett, the making of a green machine
2 Leinster look ready to step things up and burn off Saracens challenge
3 Will Connors now delivering on his massive potential
4 Keith Duggan: Surreal story of John Delaney needs to act as a wake-up call for FAI
5 Rory McIlroy battles to stay in the mix as Patrick Reed leads the US Open
Real news has value SUBSCRIBE
Crossword Get access to over 6,000 interactive crosswords