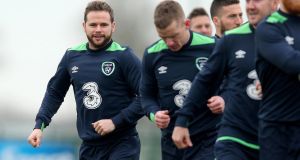 Alan Judge will miss the European Championships and most likely the start of next season after breaking his leg in the opening minutes Brentford’s win over Ipswich Town on Saturday.

The club says that while the 27-year-old will make a full recovery, it is too early to predict how long the Dubliner will be absent.

Brentford have confirmed that the midfielder has suffered a lower-leg fracture and the best-case scenario on such an injury is generally 20 weeks or more out, taking the Irishman, who was set to change clubs in the summer, to at least the end of the transfer window.

Luke Hyam, the Ipswich Town player whose challenge led to Judge being carried off, said afterwards that he was “distraught” at having caused the injury.

Brentford boss Dean Smith and Judge’s team-mate Sam Saunders both said that they had feared the worst when they heard the noise made by the impact but Hyam was only booked for what was a very poor tackle.

Amid ongoing recriminations between him and various Brentford players, he was sent off 40 minutes later and said afterwards that his “head had gone”.

Hyam (24), who had previously endured a long-term injury himself, said that he would contact Judge to apologise for what could have been a career-changing foul.

Judge remained something of a long-shot to make Ireland’s squad for the European Championships having only made his international debut last month but he was by no means out of the reckoning, particularly given the possibility that one or two of those above him in the pecking order could very well suffer setbacks of their own.

He had been widely expected the leave Griffin Park during the summer, however, having been persuaded to stay earlier this season amid widespread interest from rival Championship clubs and, it seems, some Premier League outfits. The player, who has scored 14 goals for Brentford this season, confirmed while at home for the Ireland games that he anticipated this being his last campaign with the club.

His injury will narrow Martin O’Neill options further. Goalkeeper Rob Elliot has already been ruled out of the trip to France after injuring his knee in the Slovakia game.

Bournemouth have been unable to say when they believe midfielder Harry Arter will fully recover from the Achilles problem that forced his withdrawal from the squad for the games against Switzerland and Slovakia in Dublin.

And Arter’s fellow midfielder, Glenn Whelan, demonstrated over the last few days just how unpredictable things can be when he suffered a back spasm while getting out of his car that kept him out of Stoke’s visit to Anfield, where Shay Given was again on the bench.

Daryl Murphy, Jon Walters and Robbie Keane are among the strikers on the treatment table and defender Marc Wilson is still at least a couple of weeks away from returning to action.

There was better news for O’Neill elsewhere with Shane Long returning, and scoring, for Southampton as they beat Newcastle United, while James McCarthy scored his first goal of the season for Everton at Watford.