Green gets ready to face up to Ibrahimovic 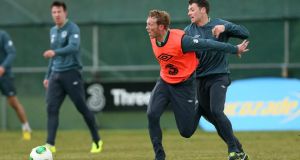 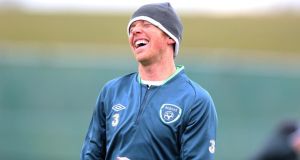 News that Giovanni Trapattoni had suggested Paul Green might be the man to deal with Zlatan Ibrahimovic clearly hadn’t reached the Leeds midfielder by the time he sat down with the media to talk about the Republic of Ireland ’s World Cup qualifier on Friday.

“Not really,” he said after initially looking a little shocked when asked whether the Italian has said much to him about the idea. “Obviously,” he continued, his expression still veering slightly, it seemed, between one of fear and excitement, “it is up to the gaffer what he decides to do and if he did ask me I would try to do the best I could, but he is a great player and it would be a tough job really.”

The midfielder is a likeable character and an engaging interviewee and if there is a concern it is, perhaps, that he is a little too respectful to those around him. The former Doncaster and Derby player heaps praise upon his young former club mate, Jeff Hendrick, and is at pains to stress how difficult it would be for him to displace either James McCarthy or Glenn Whelan in the Republic of Ireland’s starting line-up.

If he is selected to play in Stockholm it will be crucial that he is not in awe of the opposition or their star striker. Green, to be fair, though, simply comes across as a player with a keen sense of where he stands in the game’s pecking order.

Despite constant encouragement from his father, he took years to contact the FAI about being eligible to play for Ireland because he was playing in the lower leagues and didn’t think anyone would be interested.
When he finally mustered up the courage, he had the good fortune to encounter a manager who appreciates precisely what it is he has to offer: pride and application, both of which he possesses in abundance.

For some, Green seems to have become a sort of byword for all that is wrong with the Trapattoni regime. He represents, the critics believe, the triumph of industry over artistry, and the mere mention of his name tends to elicit groans from the purists. The 29-year-old certainly has his limitations but they are sometimes a little too readily trumpeted while the shortcomings of others are more willingly overlooked.

And nobody comes across as feeling more privileged to be involved, more determined to, not so much prove his critics wrong as bring them around or, while we’re at it, more baffled about the ways of a manager who continues to invest in him.

“Yeah, it’s crazy the way it comes about sometimes,” he says. “Obviously there was the late call-up against Poland. In the end I literally trained for 15 minutes because my plane was delayed and then got 45 minutes in the game. It was the same with the Euros; I got called up when Keith Fahey was injured [but ended up featuring against Spain while others were overlooked].

“I thought I did well against Poland,” he continues in relation to the criticism he gets, “but everyone is allowed their opinion and there are two quality midfelders in James McCarthy and Glenn Whelan . . . and even Jeff Hendrick coming through at Derby, they’re all quality midfielders and footballers are thick-skinned anyway; not many don't get stick, even the best in the world just have to take it on the chin.”

Few could argue, in fact, with the impact he had on the Poland game, with Green setting about the visiting midfielders in a way the Irish generally had hopelessly failed to do over the first 45 minutes. Whether he can have the same impact in Stockholm, when the stakes, and the tempo, are so much higher, remains to be seen.

Spain, after all, did not go so well, but if he fails, it won’t be for want of trying, that much seems certain.