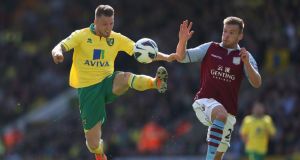 Anthony Pilkington’s inclusion in the Ireland squad indicates Giovanni Trapattoni’s desire to change from 4-4-2 to something like 4-3-3. Photograph: Mark Thompson/Getty Images)

Giovanni Trapattoni will pick up where he left off against Spain when his squad gathers in Wales for their pre-season friendly in a couple of weeks with the Italian intent, he says, on making another crack at changing the team’s shape while continuing to blood new talent.

Anthony Pilkington’s inclusion is evidence of his ongoing intent on the first front, while the absence of Robbie Keane, Richard Dunne and Keith Andrews are strong indicators of the latter.

Trapattoni’s captain will be back in September but Dunne, like Andrews, will have to convince the manager over the coming weeks he is capable of reproducing his old form.

“If he plays like the last times, I think so,” said Trapattoni when asked if the QPR defender can regain his status as an automatic starter for his country after a year on the sidelines due to a groin injury.

“I think that depends on how dangerous the injury was,” he added in relation to the soon to be 34-year-old.

“It was two very big injuries: his groin and his shoulder. I hope he can come back; for us, he’s important because of his personality, his ability in the air and he’s fast. I think he needs one month of playing.”

Opportunity
Dunne should certainly get the opportunity to do that in the Championship where the games come thick and fast, although the manager would have been happier had he not had to drop down a level.

More pressing on that front, perhaps, is that James McCarthy gets to continue his development in the Premier League. But Trapattoni seemed a little weary of all the talk about players moving, with Darren O’Dea having relocated to the Ukraine and Aiden McGeady the subject of speculation regarding a move from Russia back to Britain.

“I think he (Dunne) is the sort of player who needs to play games for his conditioning and his confidence. When he is tired you might have to rest him but it is better that he starts each game even if he comes off with 20 or 30 minutes still to play.”

The intention is to assess Dunne’s progress a few weeks into the campaign.

As for Andrew, he is at least back playing for Bolton in their pre-season. He also faces a challenge, given the manager says he “promised” the FAI he would bring on younger players and several who have been given an opportunity have done well.

Should be back
Keane should be back in for the Sweden game in September, though the fact he would probably only arrive in Cardiff the night before this game after playing in Dallas on the Sunday, was significant in the decision to leave him out.

Kevin Doyle’s ongoing absence may be more complex but his current predicament is straightforward enough, with the striker needing a major change of fortunes at club level to halt his slide to the outer margins with Ireland.

It’s not quite clear whether Pilkington would be one of the winners or losers in the event that Trapattoni succeeds in his attempt to switch from 4-4-2 to something like 4-3-3 but nobody need worry about that, of course, until he actually shows up for a game.

The 25-year-old gets another opportunity next month with Trapattoni apparently as anxious as ever to see how the player can be integrated.

1 Ireland to stick with winning formula against England
2 Should fans be allowed drink in the stand at sporting events?
3 Lewis Ludlam eager to make his presence felt for England
4 Man City banned for two seasons from European competition and fined €30m
5 Newman expected to survive fiery crash at finish of Daytona 500
Real news has value SUBSCRIBE
Crossword Get access to over 6,000 interactive crosswords