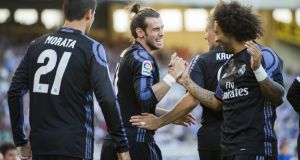 Gareth Bale built on his stunning displays for Wales at Euro 2016 by scoring a double in a commanding 3-0 win for Real Madrid in their La Liga opener at Real Sociedad on Sunday.

Bale opened the scoring with a powerful header in the second minute and rounded off the win four minutes into added time with a simple finish after new arrival Asensio had scored his first league goal for Real in the 40th with a sumptuous lob.

Zinedine Zidane’s side temporarily go third in the La Liga table on three points after one game, with Barcelona and Sevilla ahead of them on goal difference.

After title rivals Barcelona laid down a marker with a ruthless 6-2 win at home to Real Betis on Saturday, the pressure was on Real to make a strong start themselves.

They were without first choice forwards Cristiano Ronaldo and Karim Benzema, so Bale was accompanied by Alvaro Morata and Asensio instead.

The Wales international had nodded in the only goal in this fixture last season late in the second half but needed little more than 60 seconds to strike this time, meeting Dani Carvajal’s whipped cross from the right to power the ball into the top near corner.

Real Sociedad’s Argentine goalkeeper Geronimo Rulli had better luck with an arrowed effort from Toni Kroos midway through the first half, tipping the ball away at the near post.

Former Real midfielder Asier Illarramendi had the home side’s best chance to level but opted to pass to forward Juanmi rather than try his luck and wasted the opportunity.

That lapse woke up Real and they upped their search for a second goal, which arrived via Raphael Varane’s scooped pass from defence up to Asensio, the youngster controlling with one touch before producing a delightful chip over Rulli.

Real were just as dominant in the second half and were inches away from stretching their lead when Morata was denied by Rulli and Kroos met the loose ball on the volley, smashing it against the bar.

Mateo Kovacic was denied Real’s third by an another impressive save from Rulli, while the home side had a penalty appeal turned down later following a challenge by Carvajal on Willian Jose.

Bale had the last word, however, latching on to James Rodriguez’s through ball to race clear and calmly take the ball round Rulli to score again.