Fyffes aside for Ecuador, Japanese rider requests plenty of bubbly 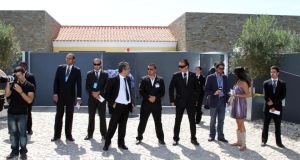 As Brazil rushes to get several of the stadiums that will stage this summer’s World Cup ready in time, hotels that will host several of the 31 delegations are also working on meeting the specific demands of their footballing guests.

Local sports paper Lance! has published some of the requests made by those taking part in the tournament which kicks off on June 12th.

According to the paper the French delegation has told its hotel in Riberão Preto to replace any bars of soap with the liquid kind, apparently claiming its players are unused to the hard stuff. Given the presence of several Muslim players in the French squad the hotel has also been asked to prepare all meals for its guests with halal meat.

Ecuador is another delegation making specific culinary requests. It wants each of its player’s room to receive a basket of bananas every day. Not just ordinary Brazilian bananas mind, but Ecuadorian varieties from back home.


Snoopers
Meanwhile the Uruguayans have asked for high walls to be built around the Arena do Jacaré where it will train in order to thwart any snoopers while they practice short corner routines.

The country’s ageing squad is banking on a good night’s sleep having demanded that the air conditioning units in their hotel rooms be silent.

But if the Uruguayans plan on plenty of rest the Aussies seem intent on staying wired during their stay in Brazil, demanding two large coffee machines be placed near the players’ rooms.

Costa Rica’s players are so relaxed about facing England they’ve asked their hotel in the port city of Santos for a chill-out space with sofas and televisions. Meanwhile Honduras has requested that the Hotel Transamérica pipe in two Honduran television channels so players can keep up with all the news and soaps back home.


Telly from home
Their group rivals Switzerland have made a similar request for telly from home. Brazilian cable already carries several Japanese channels so Japan’s FA has limited itself to demanding a Jacuzzi bath in each player’s room.

The Algerian FA has asked for a Koran to be placed in each of their delegation’s rooms as well as in rest rooms at the training grounds of local club Atlético Sorocaba where they will train for the tournament.

Iran’s delegation must be bringing their own Korans as all they have asked of Corinthians, who will be loaning their training ground to them for the tournament, is that the club’s team of cleaners be available at no extra charge.

Colombia will train across town from Iran at São Paulo FC’s facilities and have asked the club to make 15 youth team players available for training matches, a plum job for members of the club’s famed youth academy.

The most common request reported by Lance! is for video-gaming facilities. Ecuador, France and Costa Rica have all asked for a full equipped games room to cater for the gamers in their squads. Portugal has gone one better asking that each of their players’ bedrooms have a games console.

At least Cristiano Ronaldo will not lack for opponents – four of the six private bodyguards travelling with the Portuguese squad will be detailed to protecting just him.

1 Mary Hannigan: ‘Bitches Who Stood’ might be better viewed as useful allies
2 Leinster’s clash with Saracens will open Champions Cup quarter-final weekend
3 Game Changers: Living beyond fear puts Alex Honnold above all others
4 Jack Charlton’s funeral to take place in Newcastle next Tuesday
5 America at Large: Deafening silence after anti-Semitic spewing
Real news has value SUBSCRIBE
Crossword Get access to over 6,000 interactive crosswords