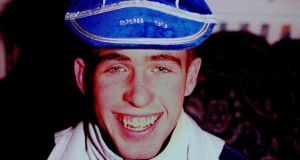 Stephen Bradley signed for Arsenal when he was 15. Photograph: Ray Cullen

The slight shift in emphasis that the PFAI wants to see reflected in the squad it assembles for this winter’s Fifpro tournament in Oslo has clearly influenced their latest choice of manager. The association, says general secretary Stephen McGuinness, wants to do more to help those who return home to Ireland, battered and bruised, after falling off the professional ladder in England. Few, he knows, will have hit the ground harder than Stephen Bradley.

The Dubliner was that year’s “next big thing” when he left for London in his mid-teens but, by his own admission, lost his way badly after getting too much too young at Arsenal where he initially made good progress before slipping to the margins and beyond thanks to his own indifference, a major personal trauma and the arrival at the club of a certain Cesc Fabregas.

Now 30, he has retired from playing after what was a pretty decent career back in the Airtricity League because, he says, he had lost his appetite for the game during those incredible years in England and never enjoyed playing in anything like the same way again.

“My mother was a single parent, she came from nothing but she negotiated my contracts on her own which was unbelievable,” he says.

“She got me a very good deal but after that. At 17 it was ‘here you go, go and buy yourself a house or a car.... or both’. You think, ‘alright’. You’re 17 and come from Jobstown in Tallaght and you’re living in London with your own house and car. It’s ridiculous. It’s not right, and that’s why we fail. People go on about the other stuff, but that’s where we need to start. And if we don’t, we won’t produce the Robbie Keanes or other players.”

But, he remembers, after years of conscientious progression as a kid in Dublin, then a promising first few months away, he checked his bank balance at an ATM one day and everything changed.

“I knew what I was getting but it never really hit home until I turned 17 and went and checked my bank, being honest. You go and check and next of all (you’re thinking) ‘how many zeros, how do I count that, like?’ That’s what it is; straightaway you think ‘alright, I’ll go and buy this, I’ll go and do that, I’ll go and do that’. You forget about what you’re here for. You’re here to make a career, be a professional footballer. But you don’t give a s**t because you have the money. You think you have the money.”

Liam Brady tried to keep him on track; told him not to buy an expensive car or home, but Bradley did both while pretending to the club’s coaching staff that he was doing the drills they devised for him to keep improving his game.

He admits was not fooling anyone and pretty soon, as he puts it, found himself “out the door” with Fabregas’s arrival probably sealing his fate.

“It was crazy,” he recalls. “He came in, I was playing (in training) but straight away you could tell how good he was. I had lost my desire and hunger to improve because I was still getting by. Then someone like him comes in and just pushes you aside.”

Not long after, he was the victim of a horrendous violent crime when, he says, he was “set up” after buying a ridiculously expensive watch.

Now, on the back of all these mistakes and terrible misfortune, Bradley wants to use his experience for the benefit of others. His is coaching with Shamrock Rovers and thought well enough of by Arsene Wenger and Arsenal to have been recently recruited as the club’s chief scout in Ireland.

It has, he says, taken a good deal of work with mental health professionals for him to get to the stage where he is happy enough in himself to be able to offer help to others but few could possibly bring more personal, often painful, insight to the table.

“People say we’re not producing the players but that’s not the problem,” he says. “The problem is that we’re not preparing them properly to go over to England. Things have to change. We have to get together and do something.”