‘Jimmy McAlinden came to our door. He came personally to sign me for for Distillery’ 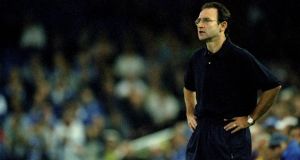 Martin O’Neill when manager of Leicester City in 1999.

His office at the Aston Villa training ground almost four years ago: Martin O’Neill’s rapid, considered responses shift seamlessly from looking ahead to the looming League Cup final against Manchester United at Wembley, to looking back at his earliest days as he grew from schoolboy at St Malachy’s in Belfast to semi-professional footballer with Distillery and fresher law student at Queen’s University. Those were days we can call Martin O’Neill BC, the days before he met Brian Clough.

Appropriately, a lot always has been made of Brian Clough’s influence on O’Neill, and over the past few weeks the points have been made again.

There will probably be some more Clough in Dublin today, not least because Roy Keane experienced the legendary Nottingham Forest manager too. It is all understandable.

But it was not Clough who signed O’Neill for Forest in 1971. It was Matt Gillies. Gillies, a Scot, is an often forgotten manager. Yet he almost led Leicester City to a league and cup double in 1963 – Leicester City.

Played in Europe
Under Gillies, Leicester played in Europe for the first time. It was something the club did not do again until 1997, when a certain Martin O’Neill was manager at Filbert Street.

In all, Gillies would stay as Leicester manager for 10 years from 1958 before moving to Forest. There he signed O’Neill and gave 17-year-old John Robertson his debut.

Having played for Leicester and Bolton Wanderers in the post-war era, Gillies presumably came across Jimmy McAlinden. McAlinden had won the FA Cup with Portsmouth in 1939 and was still at Fratton Park after the war.

McAlinden had arrived from Belfast Celtic, where he was a legend in a team full of them. He played for Ireland (northern version) first in 1937 and Ireland (southern version) in 1946.

O’Neill was a developing talent, not short of admirers, yet he could never forget what happened next: “Jimmy McAlinden came to our door. He came personally to sign me for Distillery.”

Some 40 years on, you could see this gesture still mattered to O’Neill. He was to do the same only once as a manager, when he knocked on the door of Neil Lennon’s house in Crewe.

“Jimmy McAlinden could have sent someone else round with an invitation to a couple of days’ training,” O’Neill said. “He took the time to find out who I was and came to my door to ask my parents. That had an amazing impact on me, a manager of very high regard doing that.

“He got a group of players, both Catholic and Protestant in very, very difficult times, to knit together. Wittingly or unwittingly he had these players who would have died for him. I think that’s a wonderful sign in a manager. They would have done anything for Jimmy because if Jimmy said: ‘I’ll try and do that for you,’ then he would try and do it. The players had good old trust in him. Jimmy was sharp and he was intelligent and he was quick, he knew all the tricks. But basically he dealt with you honestly.

Heart and soul
“People talked about tactics, still do – McAlinden could have blinded them on that, honestly. But he chose not to. As most great managers do, he focused on the heart and soul of the team and what would carry you through.

“But he could make changes during a game. As a manager he was very astute. He’d won the FA Cup with Portsmouth, very well thought of. When I went to join Nottingham Forest, Jimmy travelled with me. He met Matt Gillies, who treated Jimmy like a long-lost brother. He waited until I’d signed to make sure everything was all right before flying home. It was about the welfare of his player.”

Those are days you don’t forget. And when O’Neill spoke of “the heart and soul of the team”, you could feel McAlinden had affected the nature of his own management so many years later.

And O’Neill was not finished.

“He did an awful lot for me in that short period of time we were together. He gave me great confidence. A lot. A lot. He kept telling me I was capable of doing great things on the pitch. If he ever did lose confidence, it never showed.”

When people talk of O’Neill as being the ultimate man-manager of sometimes egotistical, sometimes fragile footballers, they refer to this kind of confidence injection. It then leads to an extraction, of more effort, unity, quality from a group of individuals.

This was seen most dramatically at Leicester, then at Celtic. At Villa in O’Neill’s full three seasons, the points tally was 60, 62, 64, but the finishing position was 6th, 6th, 6th. Abu Dhabi Manchester City happened in that period. Villa were leaping up into a thickening glass ceiling.

Initial surge
At Sunderland there was an initial surge. O’Neill took over a team that had won two of the opening 14 league games of season 2011-12; the same players won seven of the next 10.

The surprise was then how that momentum dwindled and neither the end at Villa or Sunderland have, publicly, been fully explained.

But neither negate the point that O’Neill learned from Jimmy McAlinden and Brian Clough, about the importance of personal confidence and how it can affect teams.

“Even the finest of players need confidence,” O’Neill said. “They need people to keep believing in them.

“As most players who have worked with me will say, as a manager it does take me time for them to win me over heart and soul, but once they have done that – unfortunately – it seems like a never-ending thing. Once a player’s in me, it’s hard to shift him out. That’s been the nature of my management.

“I’ve done that probably because I’ve always wanted that belief from managers myself. It matters. Brian Clough had his own way and when I left Forest for Norwich, Mel Mechin was the manager.

“In my second match for Norwich we lost at Wolves but he came in after the game and said to me: ‘That was world class.’ That made you want to go out and perform, and to play for people.

Xxxxxxx
“McAlinden had that. In my career he was fundamentally important. I was speaking to some old Distillery players recently and it wasn’t just me he treated that way. He had that way, and we all wanted to play for him.”

This is not an attempt to downplay Clough or Forest – how could you? – but a recognition that influences are multiple and that Distillery and Jimmy McAlinden are significant to Martin O’Neill.

Another example is that for a while O’Neill also had Danny Blanchflower as his manager with Northern Ireland.

It’s fair to say Blanchflower could be described as serious, funny, northern, lyrical, idiosyncratic and gifted. A bit like someone else.