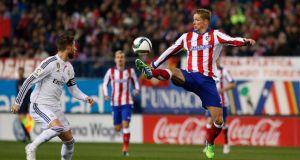 Fernando Torres enjoyed his first ever Madrid derby win as Diego Simeone’s side won 2-0 in the first leg of the last 16 of the Copa Del Rey at the Vicente Calderon. (Photograph: REUTERS/Susana Vera)

He had to leave home and come back again seven and a half years later, but Fernando Torres has finally beaten Real Madrid as an Atlético player. He did not score on his “debut” at the Vicente Calderón and he did not add to his one goal in nine games against Real in Spain, nor did he ever really look like doing so during the 58 minutes he spent on the pitch. But when the final whistle blew he walked back on to embrace his new team-mates and the former team-mate who is now his manager. When he got there they were celebrating what was another derby victory for them, a first for him.

Goals from Raúl García and José María Giménez gave Atlético a 2-0 lead in the first leg of this Copa del Rey last-16 tie. “It feels great to finally beat them,” Torres said. “I’m happy about the result, the team and the atmosphere. We have a great chance leading 2-0 but still have to go to their place and it’s not over.”

Torres was right when he said Atlético had changed completely since he was last here. In his day, beating Real was unthinkable. Now, under Diego Simeone, they have won three and drawn one of the last four meetings. The game before that run, the European Cup final loss in Lisbon, will always hurt, of course, but they have also won the league, the Europa League and the Copa del Rey. Their victims in that Cup final were Real; it was the night they defeated their rivals for the first time in 14 years.

Torres has won things too since leaving but he said that he wanted to win them with “his” team. He was handed a first start three days after 40,000 fans attended his presentation here. “I had butterflies during my presentation and again tonight and I think I will have for some time,” he admitted.

Diego Simeone had insisted: “If I didn’t think he was fit and ready, I would not play him.” He has also been enthusiastic about the fact that Torres’s arrival increases the “sense of belonging” that he says he is trying to build at the club. At left-back, Simeone handed another debut to Lucas Hernández. Torres had played alongside Lucas’s father in the second division when he first came through at Atlético.

Torres’s impact here was limited in an occasionally loose first half in which runs were made, the ball left behind, passes went astray and the best chance came after just 45 seconds for Sergio Ramos, whose header was saved by Jan Oblak. Twice Torres was called back for offside in the opening minutes. On the first he had, momentarily, appeared to have found a way through, lifting his shot over Keylor Navas and wide.

At the other end, Gareth Bale sent one long-range shot a long way wide, Sami Khedira headed over and Karim Benzema’s effort was easily gathered.

Better opportunities came to Antoine Griezmann who led a quick break and hit the side netting while Real were still complaining after Bale’s headed “goal” had been ruled out for offside. He got another chance to run soon afterwards but so too did Raphaël Varane and he was quicker. Astonishingly quick, in fact. His mistake had set Griezmann sprinting free into the penalty area but he made up for the error and made up a two- or three-metre head start to produce an impeccable challenge.

Early in the second half, Marcelo’s deep cross curled towards Bale near the right corner of the six-yard box but the shot appeared to come off his right shin and drifted wide. And moments later, on 55 minutes, Atlético took the lead.

Jesús Gámez’s throw-in reached Raúl García, backing towards Ramos. Ramos pulled him to the ground and the referee, Clos Gómez, pointed to the spot. Briefly, there were those who thought this could be Torres’s moment but it was Raúl García who took it. The wait was a long one, and García had misjudged a simple pull-back as he broke away just beforehand, but there were no nerves. Navas went the right way but the ball was hit hard beyond his reach.

Simeone immediately made his first change. Torres made way for Koke, the Calderón chanting his name. Soon they were chanting a second goal when Giménez leapt amid a crowd of players, outjumping Ramos to head in. As the ball flew into the net and the stadium erupted, a ballboy ran from the touchline and leapt into the arms of the manager who had laid such great faith by that “sense of belonging”. The ballboy was Simeone’s son.

1 Jim McGuinness: There is a way to save championship and make it competitive
2 Waterford turn Kilkenny upside down and inside out
3 Waterford’s frenzied waves of attacks too much for Kilkenny
4 Ireland’s work-ons: Four things Andy Farrell needs to address
5 Sordid murder of hurling brothers still resonates in south Galway
Real news has value SUBSCRIBE
Crossword Get access to over 6,000 interactive crosswords