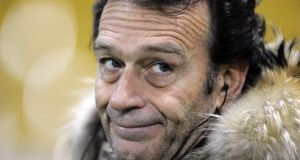 The Italian, currently appealing against a second Football League ban, is thought to have met with fans yesterday as he looks for a way out of Elland Road, having this week told The Times newspaper that his tenure had been “a nightmare”.

Cellino confirmed a deal could be in the offing to Sky Sports News and told BBC Radio Leeds: “One hundred per cent I will sell to the fans, if they want to buy it and look after the club. The fans are the only asset the club has.”

Leeds Fans United has long had the aim of buying a minority stake in the club and securing representation on the board, and yesterday’s developments put it within touching distance of achieving that goal.

Many Leeds fans voiced their opposition to Cellino during the club’s 2-0 league defeat at home to Blackburn on Thursday night.

The day before the game, Cellino lodged an appeal against his latest Football League ban.

Earlier this month the Italian was banned for a second time for breaching the Football League’s owners’ and directors’ rules following a conviction for tax evasion this year.

Cellino, who has three further criminal cases against him still outstanding, had until October 28th to contest the punishment and he submitted the necessary paperwork ahead of Wednesday’s deadline.

A statement from the Football League said: “The Football League can confirm that the legal representatives of Leeds United president Massimo Cellino have lodged an appeal against his recent disqualification under the League’s Owners’ and Directors’ Test.

“The appeal will be heard in due course by an independent League Arbitration Panel. ”

Cellino served his previous ban from January until May, having been found guilty of failing to pay VAT on a yacht.

If he is unsuccessful with his latest appeal, the 59-year-old, who took over at Elland Road in April 2014, will be unable to take part in the day-to-day running of the club. However, he is able to continue in his role until the appeal is heard.

The Football League has yet to confirm the length of any ban but it is thought it would end in June 2016, 12 months from the date of his conviction when it will be spent under English law.