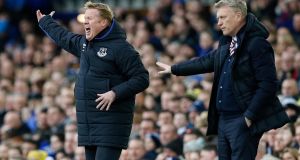 Premier League champions Leicester dropped into the relegation zone after victory for Crystal Palace against Middlesbrough.

The Foxes play their first match since the dismissal of Claudio Ranieri against Liverpool on Monday and will do so in the bottom three.

Sam Allardyce has had a miserable start to life at Selhurst Park but a 34th-minute goal from January signing Patrick van Aanholt earned Palace a crucial 1-0 victory over Boro.

Hull could also have leapfrogged Leicester and looked set to do so when Tom Huddlestone converted a 72nd-minute penalty against Burnley.

But Michael Keane, whose handball gave away the spot-kick, made amends by making it 1-1 just four minutes later to earn Burnley only their second away point of the season.

Clarets striker Ashley Barnes was sent off late on for a second yellow card but Hull could not take advantage.

It was an unhappy return to Goodison Park for David Moyes, with a 2-0 defeat for bottom side Sunderland increasing their relegation worries.

Midfielder Idrissa Gana Gueye scored his first goal for Everton in the 40th minute and Romelu Lukaku’s 18th of the season made the points safe 10 minutes from time.

The result extended Everton’s unbeaten league run to nine games and lifted them to within four points of sixth-placed Manchester United.

West Brom came from behind to defeat Bournemouth 2-1.

A foul on Ryan Fraser allowed Josh King to score from the penalty spot inside five minutes but Craig Dawson’s deflected effort quickly drew the Baggies level and Gareth McAuley profited from Artur Boruc’s error to net what proved to be the winner in the 22nd minute.

Bournemouth have taken just one point from their last six games and are only five points clear of the relegation zone.