Zlatan Ibrahimovic hints he is open to Premier League move 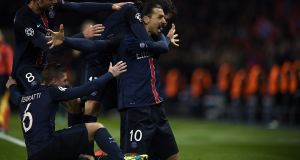 Zlatan Ibrahimovic has suggested he would be open to a move to the Premier League when his PSG contract expires in the summer. Photograph: AFP

Zlatan Ibrahimovic has suggested he would be receptive to interest from Premier League clubs if he leaves Paris Saint-Germain in the summer, with the Sweden international expected to pursue a year-long contract before seeing out his career in Major League Soccer with Miami.

The forward, who scored PSG’s opening goal in the 2-1 win against Chelsea at Parc des Princes on Tuesday with a deflected free-kick, is out of contract at the end of June and there are no negotiations under way on an extension. Although the PSG captain, Thiago Silva, went public this week to urge the club’s president, Nasser al-Khelaifi, to offer the 34-year-old striker another year at the club, Ibrahimovic has hinted he will depart on for a new challenge after four years of success in Ligue 1.

The Swede is understood to have opted against renewing the lease on his Paris apartment and has purchased a luxury flat in a proposed development in Florida, the construction of which is due to be completed in 2017.

Ibrahimovic made a point of seeking out the English media in the mixed zone at Parc des Princes on Tuesday, with talk quickly turning to his future. “I have another three months here and, then, what will happen?” he said. “Big things will happen. So let’s see.” Asked whether he would favour a first taste of life in the Premier League, he added: “Let’s just say I am in good shape.”

There remains the possibility PSG will feel compelled to offer him another 12-month deal, with his comments designed to provoke negotiations. Yet the Swede’s glittering career, which has included spells at Malmo, Ajax, Juventus, Internazionale, Barcelona and Milan, could now potentially take in a Premier League club. Ibrahimovic earns about £200,000 a week after tax, meaning only a handful of English clubs would be able to afford him. Yet he would still be an attractive proposition at that price for some given there would be no transfer fee involved.

José Mourinho has long suggested he would relish the prospect of working again with a player he coached at Inter, and the Portuguese would have explored the possibility of bringing Ibrahimovic to Chelsea had he remained manager at Stamford Bridge. The Portuguese could yet return to the English game with Manchester United in the summer, opening the prospect of the striker going to Old Trafford and renewing his rivalry with Pep Guardiola, of whom he was fiercely critical during a short spell at Barça, across the city.

The sense Ibrahimovic would jump at the chance to link up with Mourinho was strengthened on Tuesday night when he was asked by Swedish television about his former manager. “He should have been here,” he said.

Mooted for 2018 is a move by Ibrahimovic to the MLS team David Beckham is in the process of setting up in Miami. They were team-mates at PSG and Milan and Ibrahimovic, described in December as a “born winner” by the former England international, would represent a marquee signing to kickstart the project.

It has emerged that Miami Beckham United, the ownership vehicle behind Beckham’s proposed team, has held talks with Qatar Sports Investment – the owner of PSG – over the possible purchase of a stake in the franchise. MBU is hoping this month to secure a suitable site for a £200m stadium, a 25,000-seat arena to be built in the west of Miami’s Overtown district, and is aiming to be up and running for the 2018 MLS campaign.

A number of potential partners have emerged who are prepared to buy a majority stake in the venture set up by Beckham, Simon Fuller, Tim Leiweke and Marcelo Claure, with parties from China, the United States and Russia – Roman Abramovich has been mooted as a possible investor – having scrutinised the scheme. Regardless of who buys into the project, the former England captain is expected to remain the face and chairman of the club.

Ibrahimovic’s principal focus for now remains securing PSG’s progress to a fourth successive Champions League quarter-final, and claiming the first European Cup of his illustrious career, though he knows there is still much work to be done if the French club are to see off Chelsea despite that first-leg lead. “Chelsea are a fantastic team,” Ibrahimovic said. “Just because they are not doing as well as they normally do in the Premier League, it doesn’t mean they are weak. It is a strong team with fantastic players.

“I remember two years ago we won the first leg 3-1 against them, and we still didn’t go through, so this competition can be unpredictable. We have a second leg to play and anything could happen. But we will be confident going to London. If we play the way we did in Paris, we are confident of going through.”