Wins for Everton, Cardiff and Southampton 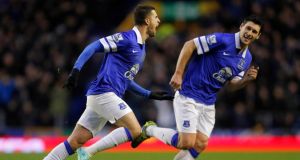 Late goals from Steven Naismith and Kevin Mirallas helped Everton bounce back from their Merseyside derby drubbing with a 2-1 victory over Aston Villa at Goodison Park.

For a long time it looked like this would be another miserable 90 minutes to go with Tuesday’s 4-0 defeat by Liverpool, with Leandro Bacuna giving Villa a shock lead in the 34th minute.

But Everton ramped up the pressure in the second half and got their reward when Naismith struck 16 minutes from time and only four minutes after his entrance as a substitute.

Mirallas then had the final word with a stunning free-kick in the 85th minute to get Everton’s top-four challenge back on track.

Cardiff’s new boys made an instant impact as Wilfried Zaha and Kenwyne Jones enjoyed dream debuts in a 2-1 win over Norwich.

The Bluebirds had trailed when Robert Snodgrass gave Norwich the lead in just the fifth minute at Cardiff City Stadium.

But substitute Zaha teed up Craig Bellamy for the equaliser just after the break, with Jones firing home the winner at the second attempt just over a minute later.

It ensured Ole Gunnar Solskjaer secured a first Premier League win since taking charge of the Welsh club which, while not moving them out of the drop zone, got them off the bottom of the table at Fulham’s expense.

And the performance of Zaha, whose introduction before half-time suddenly enlivened a Cardiff side desperately lacking a spark, will give Bluebirds fans real hope of surviving the drop.

It was Cardiff’s first win in eight league games, and Norwich have now won just one of nine as they remain firmly in the relegation battle having wasted countless chances in a game they fully deserved something from.

The renewed optimism brought by Fulham’s late flurry of transfer activity quickly evaporated as Southampton became the eighth side to take three points at Craven Cottage this season.

Staring down the barrel of relegation, the Whites took drastic action in a bid to retain their Premier League status by undergoing a 48-hour rebuilding project.

Six players arrived and four players departed Craven Cottage in that period, although there was no immediate reaction as Rene Meulensteen’s side crashed to a 3-0 defeat at home to Southampton.

Only two of the new arrivals, Lewis Holtby and William Kvist, were registered in time to feature against Saints, who spent much of the first half on the backfoot and had goalkeeper Artur Boruc to thank for keeping the score level.

Fulham were made to pay for those missed opportunities in the second period as Southampton ruthlessly exposed their soft underbelly, with Adam Lallana opening the scoring after 64 minutes with a superb strike across the face of goal.