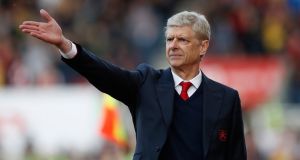 Arsène Wenger’s Arsenal have two games remaining, at home against Sunderland on Tuesday and Everton on Sunday. Photograph: Carl Recine/Action Images via Reuters

Arsène Wenger has questioned the integrity of some Premier League teams who have secured their top-flight status for next season as he faces the prospect of failing to guide Arsenal to the Champions League for the first time since 1998.

Arsenal have two games remaining, at home against Sunderland on Tuesday and Everton on Sunday, and even victories in those may not earn a top-four spot after Liverpool thrashed West Ham United 4-0 on Sunday. Two wins would give Wenger’s side 75 points – nine more than Manchester City managed last season in securing the final Champions League spot.

If Liverpool defeat the relegated Middlesbrough on Sunday and City take four points from matches at home to West Bromwich and away to Watford it will be impossible for Arsenal to finish in the top four. Wenger appeared to suggest his side’s chances had been diminished by the number of clubs who have nothing to play for other than pride.

“It will be frustrating,” the Arsenal manager said. “I still think we just have to give our best to get to 75 points and if it doesn’t happen, it doesn’t happen. At least we have done our job well to the end. We have two leagues. For example we had to fight very hard at Stoke and Southampton, but some teams once they are safe just have a breather, which didn’t happen 10 years ago. The league has changed mentally. Morally it has changed a lot.”

Pressed on the teams to which he was referring, Wenger was reluctant to expand. “I don’t want to judge that,” he said when asked whether West Ham had failed to put in a performance on Sunday to match their surprise victory over title-chasing Tottenham last week.

Wenger’s claim that some teams are already “on holiday” was rejected by Pep Guardiola. “I don’t understand how the managers speak for the other clubs and the other teams,” City’s manager said. “Ask Arsène, not me.

“I never saw one player in my life go on to the pitch and not try to win the game. But if you don’t want this situation [depending on others to get results] you have to win more games yourself. He plays against Everton and Sunderland, no? Both teams are done, no? One is relegated and one is in the Europa League, so it’s the same situation, so you don’t want to complain. Do it better during the season and you will not have this problem.”

Wenger admitted his own team’s failings will be to blame if they finish outside the top four. “I would say we would be a victim of a lack of consistency that we have shown through the season. Overall, that is in a very short spell where we have paid for it. We are a victim of nobody. If we make 75 points, we can only be beaten by one point.”

Alexis Sánchez faces a fitness test on his injured thigh and there are also concerns over the defender Laurent Koscielny’s calf injury that caused him to miss the victory against Southampton last week. Sánchez limped out of the 4-1 win against Stoke City on Saturday but Wenger was optimistic the Chilean striker and Koscielny would feature against Sunderland.

As for whether he would take the Europa League seriously, the manager did not appear enthusiastic despite insisting he would not field weakened teams. “Apart from the League Cup, where we play always the younger players to give them a chance to develop, we take all the other competitions seriously,” he said. “I think I play in my eighth [FA] Cup final. You don’t do that if you don’t take competitions seriously.”