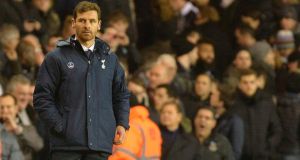 Andre Villas-Boas has spoken publicly for the first time about his disappointment at his lack of success at Tottenham and how his next managerial job is unlikely to be in the Premier League. Photograph: Toby Melville/Reuters

Andre Villas-Boas rues his failure to deliver at Tottenham and has dropped a heavy hint that his next job in management will not be in England.

After lasting less than nine months at Chelsea, Villas-Boas had a chance to rebuild his reputation at Tottenham, but the Portuguese was sacked last week following a humiliating 5-0 defeat to Liverpool.

Many Tottenham fans were annoyed at the sacking of Villas-Boas, and the appointment of managerial novice Tim Sherwood as his replacement.

That much was evident on St Stephen’s Day when a group of home fans at White Hart Lane booed their team off following an underwhelming 1-1 draw against West Brom.

Disappointed
Villas-Boas, speaking for the first time since his dismissal, is disappointed he could not repeat the success he enjoyed at Porto, where he won three trophies during his first and only season in charge.

“I wish I could have responded to the confidence shown by the fans with a trophy,” Villas-Boas told Portuguese newspaper O Jogo.

“I had great ambitions to win a trophy this season.”

With his reputation in England having taken a big hit, Villas-Boas looks set to be planning a return to the management on the continent.

The 36-year-old was not short of offers last summer. He rejected overtures from Paris St Germain while Real Madrid were also said to be interested in his services. He has recently been linked with AC Milan.

In the interview he refers to his time in England in the past tense, and talks of “re-positioning” his career, suggesting that he will not be looking for a new post in the Premier League any time soon.

“This is a time of reflection for me and my staff, and for repositioning of our careers,” he said.

“Nevertheless, England was a great experience.”

Sherwood looked to have the perfect chance to start his reign at Spurs with a win, but his team came up short against strugglers West Brom.

The Londoners looked vulnerable at the back and had to settle for a 1-1 draw after Jonas Olsson equalised Christian Eriksen’s opener.

Sherwood will have little time to gather his composure as his team face Stoke tomorrow afternoon before travelling to Manchester United on New Year’s Day.