VAR costs Wolves once again in the heel of the hunt 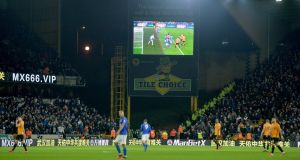 Wolves were again left cursing VAR on Friday night as referee Mike Dean was obliged to rule out Willy Boly’s header a minute before half-time because Pedro Neto was ruled offside by the back of his heel.

Nuno Espirito Santo’s team were also denied by technology in the opening-day goalless draw at Leicester, when Leandro Dendoncker’s effort was disallowed, and even after Hamza Choudhury’s red card late on they could not find a way past Brendan Rodgers’s side.

The pre-match news was focused less on Wolves leaving Adama Traoré on the bench after his dislocated shoulder and more about Manchester City’s two-year ban from the Champions League. If fifth place can really earn a place at European football’s top table, then not only can Leicester feel even more confident of qualifying but Wolves can start to dream of joining them. They knew a home victory would take them sixth and to within a point of Sheffield United.

Nuno Espírito Santo, bringing Neto in for Traoré and Dendoncker for Joao Moutinho, had laid his own ambitions on the table on the eve of the game. With no talks over a new contract with 16 months of his current deal to run, he had talked of how Wolves have become “his obsession” while letting the world know of his potential availability. Any more advancement in the Premier League or the Europa League and surely the Wolves hierarchy will want to tie their main man down to a longer-term deal.

These are exciting times in the Midlands and, despite Leicester’s relatively poor form, they had a return to second place in their sights as Youri Tielemans brought a scurrying save out of Rui Patricio with an early deflected shot.

Wolves, as is their wont, were happy to concede possession and attack on the counter initially. When Neto scampered in down the right and, at the second attempt, slid a pass in towards Raul Jiménez, Diogo Jota came running in from deep to shoot low and hard only for Kasper Schmeichel to save with his legs for a corner.

Leicester also like a quick early release however and in the very next attack Jamie Vardy’s deft touch released Tielemans who ran half the length of the pitch directly towards goal before Ruben Neves’s assiduous tracking denied him a shot at goal.

The teams were so evenly matched, trading free headers as Boly and Dendoncker went close before Caglar Soyuncu’s effort was gratefully clutched by Patricio, before Wolves started to take control. Then the game blew up as – shock, horror – VAR denied Wolves by the slightest of margins again.

Cries of ‘It’s not football anymore’ rang around Molineux as Mike Dean was booed off the field at half-time after the referee followed instructions from Stockley Park that Neto was offside by the back of his heel.

Wolves’ No 7 exchanged a short-corner routine with Jota and crossed to the far post where Matt Doherty headed back across goal for Boly to nod home. The teams were back and ready for kick-off before the dreaded signs went up on the scoreboard.

It was a painful moment for the Molineux faithful. Not only were they remembering Boly’s unknowing handball when Dendoncker’s goal was disallowed at Leicester on the opening day of the season but big tight calls against Manchester United, Liverpool and Manchester City in recent games.

The atmosphere at Molineux intensified a notch as the Wolves fans vented their sense of injustice. Memories of last season’s implausibly open 4-3 here were forgotten as Leicester defended bravely and, once Traoré came on, more deeply.

The Wolves winger pinned Ben Chilwell back as the West Midlanders threatened to take over though clear sights of goal were rare. Then Hamza Choudhury was sent off for his second bookable offence 14 minutes from time signalling the invitation to go for broke. – Guardian

1 Tokyo Olympics likely to start on July 23rd 2021, reports
2 Nicholas Quinn: ‘Swimming became how I dealt with grief’
3 A beautiful, happy accident - Moneyball is the best sports movie ever
4 Matt Williams: We all need a bit of Bud Maher’s resilience right now
5 Is it time for the New England Patriots to tear it down and start again?
Real news has value SUBSCRIBE