Unlikely setting for miracle that places Leicester on map 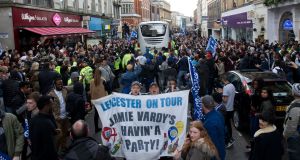 Leicester City fans celebrate after it was confirmed they were the 2015/’16 Premier League champions. Photograph: Getty Images

Just outside Leicester station there is a statue to the founder of modern tourism, Thomas Cook. In 1841 Cook ran his first organised excursion from Leicester to nearby Market Harborough and his travel business was born.

Years ago, when I was teaching in Leicester, I asked my undergraduate class why tourism came into being under Cook’s guidance. The right answer was the advent of the railways. Instead one student told me that “Cook was probably trying to escape Leicester. It’s a dump”.

The city didn’t have a great reputation. When JB Priestley travelled round the country researching his 1934 book, English Journey, he spent 24 hours in Leicester. His conclusion was it was a city he was “glad to think I did not live in”.

That said, I watched my first football game in Leicester’s old Filbert Street ground in 1979. They lost 2-1 to Sunderland, but would go on and win the league title that year and gain promotion from the old second division. Walking to Filbert Street confirmed everything I thought about Leicester. It was grim. The ground sat surrounded by terrace housing, and everything seemed run down.

Even by the low standards of English football grounds at the time, Filbert Street was bad and the football little better. Despite all these negative thoughts, your first match always stays in the mind and, while never claiming to be a supporter, I always had a soft spot for Leicester City.

Only an hour from London on the train, Leicester is the epitome of an English provincial city. It’s principal industries were the hosiery and shoe trade, it was a major home for the Co-Operative Society and had a plethora of medium size engineering firms. These all declined from the 1960s, and Leicester stagnated.

I lived there for a decade from the late 1990s as the city’s fortunes improved as a major home to the service and retail sector and with two large universities. In many ways my West Midland prejudices were confirmed, but I also grew to like the place. What was striking about the city and its residents was their world view, or rather lack of one.

Leicester was always obsessed with its near neighbour Nottingham, that was its yardstick for where it sat in the natural order. Which city was biggest, which had the most jobs, which had the better football team and which was more fashionable? And Leicester was never fashionable given the height of its musical output were Showaddywaddy and Engelbert Humperdink.

I never got the sense of Leicester thinking of itself as a big city. It was outside the sphere of London, it wasn’t northern, it just sat there quietly getting on with life, almost spurning attention and not often getting any.

By the time I moved to Leicester the football team was being turned into a success under the management of Martin O’Neill. The city is definitely a football place. Yes, Leicester has a successful rugby team, but they draw their support from the rural county. Football is for the working class city dwellers.

Prior to his departure in 2000 O’Neill had taken Leicester into the Premiership and won two League Cup finals. Despite the enthusiasm around O’Neill’s success, the city wasn’t changing. Whereas cities like Manchester, Leeds and the much loathed Nottingham were having their centres rebuilt and reimagined, Leicester wasn’t transformed.

The sense of inertia in the city, its apparent lack of creative impulse, always struck me when people talked about what was unique about the place. Well, it had the Walker’s crisp factory you’d be told, and of course, there was Gary Lineker’s dad’s stall at Leicester market. Once in a while one of the Attenborough brothers, David or Richard, would return to their home town. And there was always that giant of fiction that hailed from Leicester and celebrated its unique suburban dullness, namely Adrian Mole.

Even when Leicester came to national attention, it often had an odd air around it. In March 2015, for example, Richard III was reburied with great ceremony at Leicester Cathedral after his long lost remains had been discovered under a car park. Classic Leicester really: Richard III had lost his crown and was killed at the Battle of Bosworth in 1485 and then buried in Leicester, who forgot about him for over 500 years.

That said, many in the city have remarked that the reburial of Richard III coincided with Leicester City’s run of victories that saved them from relegation last season. Maybe there’s some magic in those royal bones.

After time spent in Leicester you begin to realise that the city’s real triumph, despite its appearance of mediocrity, was its successful creation of the UKs first majority non-white city where integration works. Asians began arriving in Leicester in the 1950s but the city changed dramatically when it became the largest home to those Ugandan Asians exiled by Idi Amin in 1972.

The city poured its resources not into building new shopping centres and public amenities, but into its communities and its race relations. But that project, despite its success, made many ill-informed people outside Leicester dismiss the city as the Asian town.

It’s not perfect, but Leicester works as a community, a diverse range of people living and working together. Leicester’s problem is that most outsiders take a view on the city but don’t go there.

The key to understanding the surprise at Leicester’s success is not simply its collection of journeymen players and a manager that was viewed last summer as a byword in failure, it’s that most people simply didn’t know anything about the place. It defined the mundane – somewhere to drive past on the M1 between real cities like London, Birmingham or Manchester, certainly nowhere anything earth shattering would ever happen.

In the end I was sad to leave Leicester. You can’t help but like the city. It’s small, compact and cosy. The people are friendly and understand what it means to be a community. But in the 10 years I lived there I could never see myself staying there forever. It’s a town for the locals who pack into the King Power Stadium and this week they can enjoy putting their town on the map.

In recent years the city centre has been transformed and it looks shiny and new. The people there take a great pride in their city, and now of course in their football team. A team whose diverse backgrounds, apparent history of unremarkable careers and apparent belief in themselves and their team spirit are a perfect embodiment of the wider city.

My advice to anyone who’s never visited, go there. You probably won’t get a ticket for the King Power, but you’ll be captivated by a city comfortable in its own skin and with few pretensions. And if you do get into the stadium, alongside the usual meat pie, you’ll get some of the best samosas the city has to offer.

Prof Mike Cronin is Academic Director of Boston College in Ireland and worked previously at the International Centre for Sports History & Culture at De Montfort University in Leicester.

Burnley end win drought to add to Leicester’s woes 16:21
Munster cruise past Ospreys on a dead rubber day at Thomond 15:47
Real Steel sees off stablemate Footpad at Thurles 15:36
14-man Saracens on the brink of last-eight after edging Racing 92 15:50
Class is permanent for Lee Westwood as he claims Abu Dhabi title 13:43