Two wins from two for Ancelotti as Everton roll Newcastle over 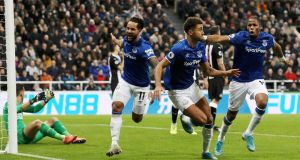 Everton striker Dominic Calvert-Lewin kept up his fine run of form as he scored twice to give Everton a 2-1 win at Newcastle United in a pulsating Premier League clash on Saturday.

It was a second successive victory for Everton’s new manager Carlo Ancelotti, who made his debut at Goodison Park with a 1-0 win over Burnley on Thursday when Calvert-Lewin netted a late winner for the Toffees.

The 22-year old fired the visitors ahead in the 13th minute, sweeping the ball home from six metres after a deflected Gylfi Sigurdsson shot fell kindly for him.

Chances went begging at either end before Fabian Schar volleyed in a 59th-minute equaliser, firing past Jordan Pickford after Andy Carroll had headed a Jetro Willems free kick into the defender’s path.

Newcastle threw men forward in the closing stages but Everton held on to extend their unbeaten league run to five games, while the Magpies suffered their first home defeat in nine outings.

Striker Danny Ings scored his 12th Premier League goal of the season to grab a point for Southampton as they came back from a goal down to draw 1-1 with Crystal Palace in their clash at the St. Mary’s Stadium.

With the Saints yet to keep a clean sheet at home this season, the game was peppered with tough tackles from both sides. Southampton’s Pierre Hojbjerg literally had the shirt torn from his back in one early altercation.

Palace had a first-half goal by Max Meyer ruled out by the video assistant referee (VAR) after fleet-footed winger Wilfried Zaha was found to have been offside during the build-up.

There were no such doubts when they eventually did take the lead, as defender James Tomkins headed Luka Milivojevic’s precise freekick in off the underside of the crossbar five minutes into the second half.

Southampton were thrown a lifeline when Palace defender Martin Kelly under-hit a back pass to Tomkins, and Ings pounced to fire a simple equaliser.

Moussa Djenepo and Ings both went close for the home side and James Ward-Prowse also had a late freekick saved, but Palace managed to hang on for a draw that leaves them in ninth spot on 27 points, with Southampton 15th on 22.

Watford gave their Premier League survival hopes a shot in the arm with a 3-0 home win over Aston Villa on Saturday, thanks to Troy Deeney’s brace and despite playing with 10 men for more than half an hour.

Watford were leading 1-0 when Adrian Mariappa was shown a second yellow card in the 57th minute for upending Villa’s Henri Lansbury, although replays suggested he did not make contact in an attempt to win the ball.

Deeney had opened the scoring after Tom Heaton made a brilliant save to parry Abdoulaye Doucoure’s shot, with the Villa goalkeeper unable to prevent the Watford skipper from firing home the rebound.

The home side earned a penalty 10 minutes after Mariappa’s dismissal when Deeney was barged off the ball. He made no mistake from the spot, striking the ball straight down the middle to score his third goal in three games.

Watford then made it 3-0 in the 71st minute when they pounced on a loose ball from Villa’s Jack Grealish to counter attack in numbers, with Etienne Capoue delivering an inch-perfect cross from the left for Ismaila Sarr to bury home.

Watford, 19th, have now won seven points in their last three games under new boss Nigel Pearson to move within three points of the safety zone while Villa remain in 18th.

Brighton recorded their first home win since the start of November with a convincing 2-0 victory over a lacklustre Bournemouth side at the Amex Stadium.

The Seagulls suffered their biggest home defeat in the Premier League in this fixture last season but got off to a dream start this time around, when Alireza Jahanbakhsh hit his first goal for the club.

The game was not without controversy, with Var overruling a second-half goal from Dan Burn after the left back was judged to be offside.

Brighton did not have to wait too long for their second goal, however, as Aaron Mooy, who impressed throughout in the centre of midfield, took a touch on his chest before firing home and making sure of all three points for the home side.

The result moves the Seagulls three points above Bournemouth, who have just two wins from their last 14 top-flight matches.