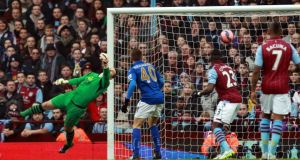 Shay Given produced a vintage display to keep Aston Villa level in the first half of their FA Cup fifth round tie with Leicester City. Photograph: Seán Dempsey/AFP Photo

Tim Sherwood made an instant impact at Aston Villa when he left his seat in the directors’ box to address the players at half-time and sparked a turnaround that saw the club reach the FA Cup quarter-finals. Dreadful in the first half, Villa were much improved following Sherwood’s intervention and went on to defeat Leicester City 2-1 to get the new manager’s reign off to the best possible start.

Although Scott Marshall was placed in temporary charge and tasked with picking the team, Sherwood could not get down to the home dressing room quickly enough after watching Villa struggle in the first half. Sherwood, who was confirmed as Paul Lambert’s successor on Saturday, looked much happier in the second half as goals from Leandro Bacuna and Scott Sinclair ensured Villa’s progress into the last eight.

“He came in there and made a few points to the lads, little bits and pieces for everyone really, and I thought the boys delivered that in the second half and were very good,” Marshall said. “I put across my points and then [Tim]had a little bit of input after that. There was a lot of individual detail there, there wasn’t one big sweeping statement. It was good information. There’s a football knowledge there that comes with a lifetime in the game.”

Sherwood had always intended to have only a limited involvement against Leicester.

“I think he will have seen the spirit in the dressing room, and hopefully that will continue into the league over the next few weeks,” said Marshall.

Given was making only his fourth Villa appearance of the season but on this evidence the Republic of Ireland international remains a top-class goalkeeper. The 38-year-old produced a wonderful one-handed stop to prevent Matt James’ left-footed strike opening the scoring.

At times it was more interesting watching Sherwood than what was happening on the pitch. High up in the Trinity Road stand, he was already on his feet when Bacuna started to glide across the penalty area before curling a sumptuous shot into the far corner. Moments later he was holding both hands aloft and wearing a grin from ear to ear. When Sinclair doubled Villa’s lead late on after Mark Schwarzer fumbled his shot, the celebration was even more animated as Sherwood indulged in a little shadow boxing.

It was not to be and the final whistle was met with huge cheers as Sherwood turned on his heel. This was not a convincing display by any stretch and there were moments in the first half in particular when Sherwood could have been forgiven for wondering what sort of job he has taken on at Villa Park, but he can look forward to an FA Cup quarter-final and approach next Saturday’s Premier League game against Stoke all the better for the insight that this performance has given him.

Nigel Pearson’s side badly lost their way after the interval. The 6,500 Leicester supporters were entitled to expect better and they made their feelings known.

This, however, was Sherwood’s day. He needs a few more between now and the end of the season. Guardian Service

3 LeBron James tells Zlatan Ibrahimovic: ‘I will never shut up’