Sunderland give English FA permission to speak to Sam Allardyce 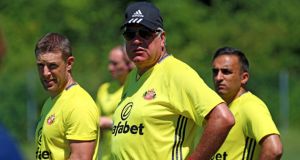 Sunderland have given the English FA permission to speak to Sam Allardyce about the vacant manager’s role. Photograph: Getty

Sunderland have called for a swift resolution to England’s managerial search after confirming they accepted an approach to speak to Sam Allardyce, at their manager’s request.

Allardyce had an initial meeting on Tuesday with the three-man Football Association panel which will appoint the next England boss.

It is understood to be the start of the formal process to appoint Roy Hodgson’s successor following the dreadful Euro 2016 campaign.

FA vice-chairman David Gill, technical director Dan Ashworth and chief executive Martin Glenn are open minded about the process and will not be rushed into an appointment, but Sunderland want the uncertainty over Allardyce to be clarified as quickly as possible.

A Sunderland statement read: “The Football Association contacted Sunderland AFC to seek permission to speak with our manager as part of what was supposed to be a confidential discussion process with potential candidates for the position of England manager.

“At Sam Allardyce’s request, we agreed to this.

“Sam is very much key to our plans. After what was an extremely challenging season, we are keen to see a period of stability, both on and off the field, and we want him to remain as manager of our football club.

“The ongoing speculation over Sam’s position is extremely damaging to Sunderland AFC, particularly at this crucial time of the season and we urge the FA to respect the disruption that this process is causing and bring about a swift resolution to the matter.”

Allardyce steered Sunderland to Premier League survival last season but his approach and tactics have attracted criticism in some quarters in the past.

Jose Mourinho, following a goalless draw between Chelsea and West Ham in January 2014, accused Allardyce’s team of playing “football from the 19th century”.

The 61-year-old has achieved notable results, though, with Bolton, West Ham and Sunderland.

There is no set number of candidates or date by which an appointment will be made, while the FA is understood not to have ruled out an interim appointment for September’s World Cup qualifier with Slovakia.

The preference is for a permanent appointment by then, but that could upset clubs whose managers are in the running as the season’s start approaches — hence Sunderland’s request for speed.

The clubs of any other manager to be considered will also be approached through formal channels before any discussions.

Hull’s Steve Bruce on Wednesday said in the Daily Mail he was still to be contacted, while Arsenal’s Arsene Wenger and Bournemouth’s Eddie Howe are other names linked to the vacancy.