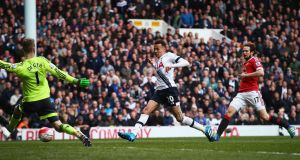 Tottenham Hotspur refuse to give up on their Premier League title dream. There had been a measure of deflation in the ranks beforehand when the leaders, Leicester, closed out their victory at Sunderland to take a bold step towards the least likely title triumph of all time. But Tottenham did what they had to do and they will keep fighting until the last.

A game only came to the boil when Dele Alli converged on to Christian Eriksen’s cross from the left to sweep past David De Gea and what happened next advertised the ruthless streak that Pochettino has instilled at White Hart Lane, together with United’s emptiness and odd melancholy.

Toby Alderweireld lost Marcos Rojo on an Erik Lamela free-kick to head the second, and Lamela landed the final punch, when he pounced in front of Daley Blind to ram home Danny Rose’s low cross. It added up to three goals in six minutes and it could have been more chastening for United, but De Gea tipped over Harry Kane’s header, Kyle Walker hit the post and Mousa Dembélé went close in a one-on-one.

United had arrived late after their team bus was caught in traffic – the kick-off was delayed by 30 minutes – and, after a reasonable start, they drifted into nothingness. Apart from one Anthony Martial chance on 61 minutes, they offered little as an attacking force.

Timothy Fosu-Mensah had played well at right-back, but when he was forced off through injury to be replaced by Matteo Darmian, United were suddenly vulnerable. Darmian conceded the free-kick for Alderweireld’s goal, while Tottenham’s other two goals came up Darmian’s flank.

Pochettino, however, had said beforehand Tottenham needed to win their remaining games, so it was just a question of them keeping their minds on what they could influence.

Tottenham had to impose themselves but they were flat at the outset, despite the best efforts of both the home crowd and Pochettino to rouse them.

United started quite nicely in terms of their tempo and the intensity of their pressing. They gave Tottenham little room for manoeuvre, with Jesse Lingard at the heart of the hustle. Martial showed flickered of menace. And yet there was precious little incision.

Tottenham recycled the move and Eriksen’s cross was made to measure for Lamela. Completely unmarked at the far post, and only six yards from goal, Lamela headed wide. It was a horrible miss. Walker then made a driving run and he jinked inside Rojo, but Fosu-Mensah leaped into a tackle that stopped him.

Van Gaal withdrew centre forward Marcus Rashford at half-time and sent on Ashley Young. To general surprise, it was not for Young to play on the left and Martial to switch through the middle; rather a straight swap. Young would lead the line.

Van Gaal is nothing if not quirky. His line-up continued to feature Lingard, a winger, in the number 10 role and Mata, a number 10, on the right. At 3-0, Van Gaal brought on Memphis Depay for Mata, switched Young to the right and pushed Martial up front.

And it was United, from their only chance of the game, who almost went ahead. Martial ripped past three defenders but his shot was too close to Hugo Lloris. How Tottenham turned the screw. Alli was booked for diving in the 90th minute, but it did not matter. Tottenham retain the flicker of hope. Guardian service