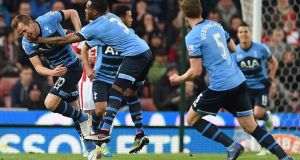 By the time Tottenham Hotspur had completed their night’s work, featuring two more goals each for Harry Kane and the exceptional Dele Alli, nobody could be in any doubt about the durability of this team and the collective belief among Mauricio Pochettino’s players that there is still time to catch and overhaul the only side above them in the Premier League.

The odds are still stacked against them, with five points to make up over four games, but if Spurs wanted to remind Leicester City of their presence they did so with the expertise of a team playing like would-be champions. A trip to Stoke was supposedly going to be one of the more challenging assignments of their run-in but this was a rout and it could have been even more harrowing for the home side if Alli had not hit the post with an extraordinary miss in between his goals.

Alli can be forgiven when he plays this stylishly and he was instrumental in a victory that re-established Kane as the top division’s leading scorer – now on 24, two ahead of Jamie Vardy – and left the firm impression that the side from White Hart Lane are immune to nerves.

Spurs played some beautifully constructed football at times, passing the ball with speed and movement through midfield, with Alli, Mousa Dembélé and Eric Dier all prominently involved. Christian Eriksen and Érik Lamela were elusive opponents and Kane’s performance was another reminder of his credentials to win the industry’s player-of-the-year awards. Kane can certainly be regarded as the most complete all-round striker in the top division and the England international made it a difficult night for Ryan Shawcross and the other Stoke defenders.

His first goal was another outstanding one to add to his collection, and from a position where a lesser striker might have considered it audacious even to imagine scoring. Kane, never low on self-belief, was in the inside-left channel, close to the corner of the penalty area, when he accepted a return pass from Dembélé and cut inside with a change of pace. Stoke had plenty of players in defence but Kane turned away from Philipp Wollscheid and the nearest other opponent, Geoff Cameron, was not close enough to put in a saving tackle. Kane had a look at goal, adjusted his body shape and curled a diagonal shot, left to right, through a small gap and into the far corner.

Kane had been let down by a poor first touch a few minutes earlier when Lamela’s pass gave him the first chance of the night. Shay Given, starting his first league game for almost a year, managed to turn the ball away but that moment served as an early warning about the ability of Pochettino’s men to open up opposition defences and, by half-time, Stoke were probably fortunate to be only one behind.

One move, in particular, highlighted the away team’s superiority on the ball, culminating in an exquisite flick from Alli to turn on Lamela’s pass and send Eriksen scampering through the middle. The Dane had a clear run at goal but it was a slightly wild finish and the ball thudded back off the crossbar.

Stoke’s most encouraging moment in that period came via Marko Arnautovic with a stinging 25-yard shot that Hugo Lloris beat out. That apart, there was only a short spell when it seemed as though Mark Hughes’s players might be establishing any control on the game and, in keeping with what often happens here, he and the club’s supporters reverted to taking out their frustrations with a series of exaggerated grievances about the match officials.

Another feature of the game was the willingness of Kyle Walker and Danny Rose to surge forward from their full-back positions and there was another chance for Spurs early in the second half from one of those galloping breaks. Kane’s through ball was weighted perfectly but Rose was being chased by Cameron, slipped at the vital moment and the chance was lost. Not long afterwards, Alli turned a shot over the crossbar from near the penalty spot and there was a flash of indignation from Pochettino on the touchline. His team has been dominant but while there was still only one goal between the two sides their lead remained vulnerable.

Stoke looked ordinary in comparison but, approaching the hour-mark, the bottom line was that they were still in it. Given blocked Lamela’s shot and the referee, Neil Swarbrick, did not appear to see Shawcross wrestling Toby Alderweireld to the ground inside the penalty area.

The second goal finally arrived when Eriksen’s clipped pass left Alli running clear to dink a shot past Given and, after that, there was a collapse from the home team. Kane rolled in the third goal after Lamela had sprung the offside trap and Alli’s volley to make it 4-0 made up for a miss, after he had rounded Given, that was completely out of keeping with his performance. Spurs might not win the league but they are playing the best football of any team right now and Leicester could be forgiven for looking over their shoulders.