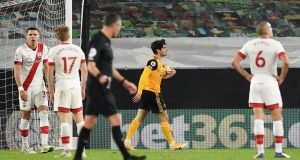 Pedro Neto after scoring the equaliser for Wolves against Southampton on Monday night. Photograph: EPA

Fleetingly, it looked like Theo Walcott’s first goal since rejoining Southampton would yield a precious win. Instead it spurred Wolves, who struck back thanks to Pedro Neto and came close to claiming a victory that had looked unlikely for most of the match.

Before kick-off the team sheet triggered a double-take, as for the first league match since October 2017 Wolves’ lineup did not include Conor Coady. The captain had been hoping to make his 122nd consecutive league appearance and edge closer to the club record of 127 held by Phil Parkes.

But Nuno Espírito Santo decided the prudent option was to omit Coady, who had not been able to train in the buildup after being forced to withdraw from England’s squad 11 days ago for coming into contact with somebody who had tested positive for Covid-19. Nuno’s cold decision emphasised what a feat Coady’s long run in the team had been, confirming it owned nothing to sentiment.

While Coady watched from the Molineux stands, Romain Saïss was in quarantine at home, having tested positive while on international duty with Morocco. The absence of those two defenders convinced Nuno to deploy a back four, a radical deviation from his customary three-man central defence.

The visitors made the smoother start as Wolves’ rearguard looked a little shaky in their new formation. But within four minutes Wolves showed their threat at the other end, with Oriol Romeu resorting to a foul to stop Daniel Podence. João Moutinho blasted the free-kick into the wall but Alex McCarthy had to make a desperate double-save to turn away fierce shots on the rebound by Nélson Semedo and Leander Dendoncker.

Then Southampton, moving with verve and stealth, worked a nice opening for Walcott in the 15th minute but the forward did not catch his shot crisply, allowing Rui Patrício to save. Five minutes later Max Kilman had to make an excellent tackle near the area to curtail a strong run by Che Adams.

There was a sharp authority to Southampton’s play as they forced Wolves backwards. But Adama Traoré, returning to Wolves’ starting lineup after starting the last five matches on the bench, reminded them of his menace by dispossessing Romeu in midfield, zigzagging past two opponents and bringing a save from McCarthy from 25 yards.

Ralph Hasenhüttl’s side retorted with a snazzy move, pinging passes around before Stuart Armstrong poked the ball just wide from the edge of the area. Although the contest was tight, the visitors were occasionally finding holes in Wolves’ unfamiliar defence. But Wolves attacked with zeal when they could, and McCarthy had to react smartly to flip a header by Podence over the bar in the 35th minute.

Although Traoré threatened sporadically, Southampton generally did a good job of containing him, so much so the winger was booked just before half-time for a mistimed tackle after being beaten to the ball. Rùben Neves had suffered a similar sanction moments earlier.

Second-half surges tend to be a Wolves speciality. True to form, they were the first to threaten after the break, with McCarthy beating away a powerful shot by Podence. Then Raùl Jiménez, uncharacteristically subdued in the first period, should have tested the goalkeeper again but glanced a header way wide from eight yards.

Southampton then imposed an edit on the script, seizing the lead by profiting from chaotic Wolves’ defending. Armstrong outmuscled Aït-Nouri on the right and fed Moussa Djenepo, who clipped a pass to Adams at the right-hand side of the six-yard box. The forward sidefooted the ball first time across the face of goal and, with Semedo dozing, Walcott accepted the invitation to score from close range.

Last season Wolves gained more points from losing positions than any other team in the league, evidence of the spirit and cohesion that drove them. By contrast, they went into this game having lost every game in which they have fallen behind this season, an indication of their growing pains as they try to develop their style. Walcott should have increased the deficit in the 65th minute but shot wide after being sent clear by Adams.

That miss proved costly when Jiménez struck a beautiful shot from the edge of the area against the post, and Neto, sprung from the bench moments earlier, followed in to equalise. - Guardian