Liverpool have offered €30m but Ukrainian side value him at €50m 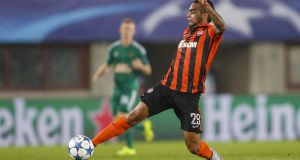 Shakhtar Donetsk have opened talks with Liverpool over the possible transfer of Alex Teixeira, a source at the Ukrainian club said. Liverpool are so far the only club who have made an official approach for Teixeira.

Lverpool have offered €32 million for the Shakhtar forward, with their chief executive, Ian Ayre, flying to Florida to try to clinch a deal.

Shakhtar, who are in Orlando preparing for the Florida Cup, value the 26-year-old at €50 million and are unlikely to go much lower, but Liverpool are hopeful they can agree a deal to add firepower to a forward line ravaged by injuries.

Christian Benteke is Liverpool’s highest scorer in the league this season with six. Coutinho has five, Origi one, Sturridge two and Ings two.

Teixeira suffered a hamstring injury – a common sight at Liverpool this season – on Tuesday morning which forced him to miss Shakhtar’s 3-2 friendly defeat by Corinthians on Wednesday. But Shakhtar’s coach, Mircea Lucescu, indicated it was not a serious problem. “I decided not to risk it and rest him,” he said.

Liverpool’s most expensive summer recruit was a substitute in the league games against Manchester United and Arsenal. Benteke was also on the bench in the wins at Chelsea and Manchester City when Klopp favoured Roberto Firmino in attack.

“You are too quick in your judgments,” said Klopp, when asked if the 25-year-old featured in his long-term plans. “If I worked like this I would send players who miss chances to the next club or whatever. Stay cool. Of course he has a future. That is not a question.”

Meanwhile, Newcastle are ready to end their interest in Andros Townsend after Tottenham refused to budge on their valuation of the England winger.

Steve McClaren is keen to add a winger to his squad and had a £10 million (€13 million) offer for Townsend rejected last week. But despite an attempt to take the 24-year-old on loan with a view to signing him permanently in the summer, Spurs chairman Daniel Levy has insisted he will only consider selling him.

That has led Newcastle to switch their attentions elsewhere, with Barcelona forward Sandro Ramirez understood to be on their wanted list. Having tried to sign the Spain Under-21 international in the summer, Ramirez, who can also play as a striker, is available on loan having rejected the chance to join Real Betis this week.

Tottenham have also been linked with the 20-year-old, who is believed to have a £9 million release clause in his contract which expires next year.

Newcastle have also enquired QPR winger Matt Phillips, who is likely to be available for around £4 million, and Aston Villa’s Scott Sinclair. Guardian Service