Arsenal get back on track against Bournemouth 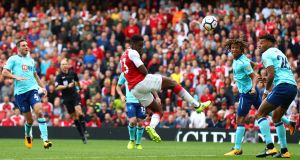 Danny Welbeck scored a brace as Arsenal swept past Bournemouth at the Emirates. Photograph: Clive Rose/Getty

Danny Welbeck struck twice as Arsenal eased to victory over Bournemouth to get their Premier League campaign back on track.

The Gunners had lost to both Stoke and Liverpool heading into the international break but they were never in trouble here as Welbeck inspired them to a 3-0 win against a poor Cherries side.

Welbeck opened the scoring early on with a mistimed header before setting up Alexandre Lacazette and then completing his brace with a well-taken second.

Manager Arsene Wenger recalled both of his summer signings in Lacazette and Sead Kolasinac and both impressed as Alexis Sanchez was only named on the bench.

After losing 4-0 at Liverpool last time out, Welbeck settled any nerves with an early goal — getting enough on Kolasinac’s cross to divert the ball past Asmir Begovic with six minutes gone.

Kolasinac, operating as a wing-back rather than in Wenger’s back three, was causing problems for the Cherries defence and another marauding run culminated in Granit Xhaka stinging the palms of Begovic with a low drive.

Mesut Ozil was next to test the former Chelsea goalkeeper, bending a free-kick towards the corner only for Begovic to push it clear.

The second goal came just before the half-hour mark, Ozil playing a pinpoint pass to Lacazette, who exchanged passes with Welbeck before finishing well.

Arsenal’s club-record signing could have had a second soon after but Begovic recovered after hitting a clearance straight at Welbeck to dive at the feet of Lacazette as he looked to pounce.

Wenger’s men were rampant and only a block from Adam Smith, seemingly off his arm, kept out a Kolasinac volley after a smooth Arsenal attack.

Bournemouth started the second half with more intent as Jermain Defoe headed against a post, only for Arsenal to go down the other end and wrap up the points.

Lacazette robbed Bournemouth of possession and the ball broke for Aaron Ramsey who rolled a pass into Welbeck with the England international tucking home his second with a low finish.

The former Manchester United man should have had his hat-trick on the hour mark but his attempted chip dropped wide of Begovic’s goal.

Welbeck was replaced with 15 minutes remaining as Sanchez was introduced to a mixed reception — the Chilean was soon into the action as he set up fellow substitute Olivier Giroud to again test Begovic.

Arsenal saw the game out with relative ease, Petr Cech saving a late Joshua King header aside, to pick up their second win of the season having been on top for much of the contest.