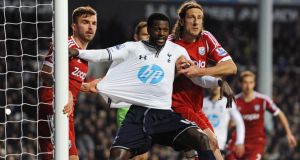 For Tim Sherwood, this was an unwelcome reminder of the size of the job he has taken on at Tottenham Hotspur, as his first match since his appointment as head coach ended in disappointment and a smattering of boos.

Sherwood presented a picture of frustration on the touchline, no more so than when he almost ended up on his backside after reacting furiously to the desperately poor defending that led to West Bromwich Albion equalising through Jonas Olsson.

On this evidence we are not looking at a future Strictly Come Dancing candidate. More important for Spurs fans is whether Sherwood has the ability to be a successful football manager.

If there were promising signs in the thrilling 3-2 victory at Southampton on Sunday, this encounter showed how much work there is for Sherwood to do to get Spurs playing fluently and to turn them into authentic challengers for a place in the top four. At the moment, they are coming up short.

Although Spurs improved in the second half, when they had greater control of the game and looked the more likely side to pinch a winner, it was a far from convincing performance.

Unable to play through a resolute five-man Albion defence, Spurs’s best second-half chances were shots from distance, from Kyle Walker and Danny Rose, until late pressure yielded headed opportunities for Gylfi Sigurdsson and Roberto Soldado, neither of which were on target.

Sherwood, whose arrival in the dugout beforehand was decidedly low key, stressed that he is under no illusions what the fans expect at home, and admitted Spurs need to improve, which he is confident they will do given time.

He also acknowledged that it represented a leap of faith on the part of Daniel Levy, the Spurs chairman, to entrust a 44-year-old, who has no previous managerial experience, with the job of replacing Andre Villas-Boas.

Once again Sherwood had opted for an open 4-4-2 formation, with Lewis Holtby and Christian Eriksen in the centre of a lightweight midfield, and Soldado and Emmanuel Adebayor up front together.

But that bold approach failed to produce the penetrative, incisive attacking football the head coach hopes to deliver. At times, especially around Albion’s area, Spurs looked devoid of ideas.

“I’m disappointed with the result,” Sherwood said. “In the second half I thought we were better. We delivered a lot of balls into their box but I think it was too much reliant on the rub of the green, hoping it would fall for us and it didn’t. I thought we could be a bit more adventurous around the penalty area and risk the ball a lot more but it’s been difficult because we’ve had so little time to work on the training field.”

If the hope among home fans was that Eriksen’s goal would provide Tottenham with the springboard to play with more conviction, nothing could have been further from the truth.

Eriksen was penalised for a foul on James Morrison moments later and from the free-kick that followed Morgan Amalfitano delivered an inswinging cross that Adebayor, dangling out a right leg, made a pig’s ear of trying to clear. Olsson, totally unmarked, had the simple task of prodding the ball over the line.

“We didn’t have time to draw breath,” Sherwood said. “It was a poor free-kick to give away, we were unable to clear it and it was a kick in the privates, to be honest.”

It was, however, no more than West Brom deserved. The visitors, who appear to be edging closer to appointing Pepe Mel, the former Real Betis manager, as their head coach, were a constant threat on the counter-attack in the first half and would have had more to show for their efforts had Matej Vydra and Morrison been more ruthless.

Not that Keith Downing, the caretaker manager, was upset with the outcome. “Overall I’m delighted,” he said. “Beforehand you’d think a point at White Hart Lane is something given the situation we’re in.”