Saido Berahino to back down on no-play West Brom strike

‘He will be playing. We have made contact with both the club and the player’ 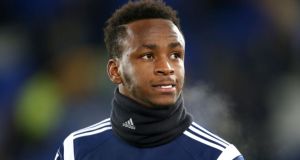 Saido Berahino will back down on his strike threat and return to action with West Brom, according to players’ union boss Gordon Taylor.

Berahino tweeted his vow never to play under Baggies chairman Jeremy Peace again after the club rejected a number of bids from Tottenham towards the end of the transfer window.

But with the 22-year-old reportedly set to return to training on Sunday, Professional Footballers’ Association chief executive Taylor said he was confident there was little chance of Berahino following up on his threat.

Taylor told BBC Radio Five Live’s Sportsweek: “He will be playing. We have made contact with both the club and the player and we are very hopeful the matter will be resolved.”

Taylor went on to add his voice to calls for the summer transfer window to be closed before the start of the new season.

This year’s overlap saw a number of top players left in limbo while clubs fought over their respective futures, with John Stones also making clear his desire to quit Everton for Chelsea.

Taylor added: “I think to have the window open once the season starts has created some very frenzied activity and left a lot of good players who should have been on the pitch not playing.

“John Stones had to cope with a lot as Everton — as was their right — wanted to keep him.

“We have fought long and hard to have players literally free.. but that comes at the end of their contract, and before that happens it needs two clubs to agree.”