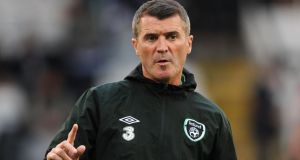 Roy Keane will take up the role as assistant manager to Paul Lambert at Aston Villa, starting next Monday.

The 42-year-old will work alongside Lambert at Villa Park, combining the role with his post as Republic of Ireland boss Martin O’Neill’s number two.

The FAI confirmed as much in a statement. It read: “Roy Keane will take up the combined role ahead of the Villa squad’s return to pre-season training on Monday, July 7th.

The move will provide further opportunity for Roy Keane to coach outside the international window and at the same time continue to monitor the progress of Irish players involved in the Premier League.

Commenting on the agreement, Republic of Ireland manager Martin O’Neill said, “This is a good arrangement for us that allows Roy to remain in position as my assistant manager. Since he started in November, Roy has been excellent with the players and I have no doubt that he will bring all of the positive attributes he has shown here to the role he takes on at Aston Villa with Paul Lambert.”

FAI Chief Executive John Delaney said: “We met with Martin and Roy to discuss retaining Roy’s on and off the field responsibilities with the Irish team and becoming assistant manager at Aston Villa. Both Martin and I have spoken to Paul Lambert and we are comfortable that this agreement will work well for us and the Irish team.”

Commenting on the new position, Republic of Ireland Assistant Manager Roy Keane said: “I am looking forward to linking up with Paul Lambert at Aston Villa and thank Martin and the FAI for giving me the opportunity to do so.

“I remain totally committed to my job with the Republic of Ireland and all that it involves. This agreement promises to be an exciting challenge and will give me an opportunity to continue developing my coaching skills on a daily basis that should ultimately benefit everyone.”