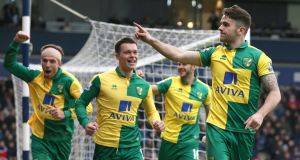 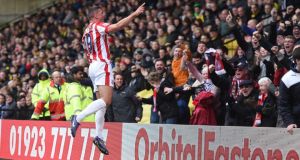 Republic of Ireland winger Robbie Brady fired Norwich out of the relegation zone with the winner at West Brom to give the Canaries fresh survival hope.

The visitors clinched a 1-0 victory at The Hawthorns to end a winless run of 11 games and move three points clear of the Premier League bottom three.

Sunderland could overtake them with a win in their crunch north-east derby with Newcastle on Sunday but Norwich sealed their first away clean sheet of the season.

The Baggies, unbeaten in their last eight home games, were poor and failed to test John Ruddy all game.

The Dubliner was the most inventive for Norwich and signalled his intent early when he fired a 20-yard free-kick over.

Saido Berahino and Salomon Rondon were off target from distance during an even opening but the pair were mainly shackled by the excellent Timm Klose and Sebastien Bassong.

Claudio Yacob, who has scored once in 115 games for West Brom, then whistled a rasping volley wide after 20 minutes which had Ruddy struggling.

There was little between the teams, who lacked quality and urgency to make the contest interesting.

Norwich needed to be more proactive given their precarious position in the table but barely looked like making a first-half breakthrough.

Dieumerci Mbokani was forced wide too often while Chelsea loanee Patrick Bamford was anonymous on his second start for the club.

It was comfortable for Albion, although the hosts hardly threatened themselves, and they needed a gift to go closest just before the break.

Gary O’Neil sloppily gave the ball to Stephane Sessegnon and the midfielder drove at the Norwich defence before shooting wide.

It was a let-off for Norwich, who came into the game without a win since January 2, but they came out firing in the second half to take the lead five minutes after the break.

A neat ball up to Mbokani allowed the striker to find space on the edge of the box and feed Matt Jarvis.

The winger then made a complete hash of his own attempted shot but the ball broke for Brady to fire under Ben Foster from seven yards.

There was little immediate response from the hosts and Bamford shot wide from a tight angle as Norwich grew in confidence.

The Baggies, unbeaten at home since December, saw plenty of the ball but continued to be met by a scrappy Norwich rearguard.

The Canaries remained calm and Jonny Howson had a chance to seal the game during six minutes of stoppage time but could not control the ball before Ben Foster gathered as the visitors held on.

The Hornets looked a pale shadow of the side which memorably beat Arsenal six days ago to reach the semi-finals as they slipped to a 2-1 defeat.

Republic of Ireland forward Walters, recalled to the starting line-up due to injuries, tucked in his fifth Premier League goal of the season in the first half and then cleverly set up Joselu for the second after the break.

Watford pulled one back through Troy Deeney but could not prevent Mark Hughes’s side moving to within a point of Manchester United in sixth place.

Watford created the first opening when Odion Ighalo, a goalscorer at the Emirates, hit an angled drive which Jack Butland kept out low to his right.

But it was all Stoke after that, although Walters chose the wrong option when, rather than shooting from the corner of the six-yard box, he pulled the ball back to no one.

However, he was in the right place in the 18th minute when overlapping full-back Phil Bardsley swept a low ball into the area.

Hornets defender Miguel Britos missed the ball completely, allowing Walters to pounce at the far post for his fifth Premier League goal of the season.

City had the ball in the net again shortly after but Marko Arnautovic was on the wrong end of the tightest of offside decisions when he tucked in another cross from Bardsley.

Jose Manuel Jurado could have hauled Watford level after he was teed up by Ighalo but the Spaniard lifted his shot too high.

Tempers briefly flared just before the interval when Allan Nyom’s challenge shoved Arnautovic into the advertising boards, earning the Stoke forward a sore ankle and the Watford defender a yellow card.

And six minutes after half-time Stoke grabbed their second thanks to an error from Heurelho Gomes and a canny piece of invention from Walters.

Hornets goalkeeper Gomes scuffed his free-kick straight to Walters, who instinctively volleyed the ball into the path of Joselu leaving the Spaniard clean through to score with a deft lob.

Some more sloppy play, this time from Etienne Capoue, almost let Ibrahim Afellay in for a third but Gomes kept out his shot from 15 yards.

Watford pulled one back when substitute Ikechi Anya crossed for Deeney to head home, but they were unable to force an equaliser.

Fernandez had not scored in 57 appearances since signing from Napoli in August 2014 but he chose the perfect moment to open his account, even if the Argentina central defender actually knew little about it.

Villa might have lost a man when Aly Cissokho received a stern lecture from referee Mike Dean rather than a second yellow card after the left back brought down Modou Barrow after 53 minutes.

But Villa were punished anyway when Brad Guzan failed to collect Gylfi Sigurdsson’s free-kick and the ball rolled into an empty net off Fernandez’s right shoulder.

Villa might consider the goal an unsatisfactory way to lose a contest but, in truth, it was in keeping with a scrappy game which was woefully short on quality.

For most parts, it looked like a fixture that would not be out of place in the Sky Bet Championship next season which, of course, it could be.

Villa are almost certainly doomed after winning only three league games all season, while Swansea could not take their eight-point buffer above the drop zone at kick-off for granted.

Swansea’s run-in is certainly a tough one on paper and points will not come easy on this evidence, but they have now moved within four of the magic 40-point mark and the final few weeks of the season should be less tense.