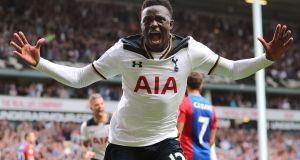 Victor Wanyama scored a late header to give Tottenham’s season lift-off as Mauricio Pochettino’s men recorded their first victory of the campaign against Crystal Palace.

Spurs looked destined for a frustrating afternoon at White Hart Lane as summer signing Vincent Janssen and Harry Kane were both thwarted by a resolute Palace back line.

Instead Wanyama, bought from Southampton in June, capped his home debut with an 83rd-minute winner, heading in from close range to snatch a dramatic 1-0 win.

Tottenham fans arriving for their first game of the season would have been surprised to see their ground with a gaping hole in the north east corner, as the construction of the club’s new stadium has meant the removal of 4,000 seats at one end.

They may also have looked twice at the teamsheet as Pochettino dropped Dele Alli and instead rewarded Janssen, impressive off the bench against Everton last weekend after joining from AZ Alkmaar, with a starting spot up front.

Palace had announced the signing of their own blockbuster forward, Christian Benteke, less than five hours before kick-off, but the Belgian was not involved in the squad and will have to wait until Tuesday’s EFL Cup game against Blackpool for a chance to make his debut.

There was nothing much between the teams then until late in the second half - when, Spurs, looking to be running out of ideas, transformed the mood as Kane headed Erik Lamela’s corner towards goal and Wanyama was perfectly placed to nod into the back of the net and seal a hard-fought three points.

Ronald Koeman got his first Premier League victory as Everton manager as West Brom lost 2-1 at The Hawthorns in front of new owner Guochaun Lai.

Lai, who heads the Chinese investment group which at the beginning of this month completed its takeover of the club, saw his team make the perfect start to their home campaign as Gareth McAuley headed Albion into an early lead.

However, goals from Kevin Mirallas and Gareth Barry either side of half-time saw Koeman claim his first three-point haul as Toffees boss after drawing 1-1 at home to Tottenham on the opening day.

Barkley should have extended the lead after 72 minutes but he powered a near-post header wide from a pin-point cross from substitute Yannick Bolasie, making his debut following his reported 25million arrival from Crystal Palace this week.

Romelu Lukaku was then denied a late goal by Ben Foster on his return to his old club - when through on the home goalkeeper, while a last-gasp chance to earn a point was put over the crossbar by Salomon Rondon.

Hull recorded a second straight Premier League victory as a 2-0 win condemned Swansea to a first home defeat since February.

Shaun Maloney and Abel Hernandez struck in the final 12 minutes as the Tigers built on their surprise opening-day win over champions Leicester.

Maloney had only been on the pitch six minutes when Curtis Davies flicked on Robert Snodgrass’ 78th-minute corner and he finished from close range for only his second Hull goal.

Hernandez then wrapped up the three points in stoppage time as the Swans were punished on the break.

Swansea had also won their first game at Burnley, but they ran out of ideas at the Liberty Stadium after a promising opening when Modou Barrow’s pace had posed problems.

Until Maloney’s goal, it looked as if the main talking point would be referee Stuart Attwell turning down three genuine penalty claims in the first half — two from Swansea and one for Hull.

Nevertheless it was Hull who came away with a second unlikey win in a row. What crisis?