O’Neill believes he didn’t get enough time at Sunderland 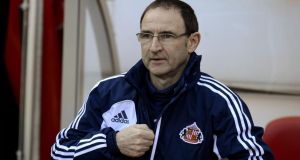 Former Sunderland manager believes he had earned more time than he was given at the club. Photograph: Owen Humphreys/PA Wire

Martin O’Neill believes he should have been given the chance to replicate his achievement of last season and save Sunderland from relegation.

The Ulsterman was sacked from the Stadium of Light post on Saturday evening, hours after the Wearsiders’ 1-0 home defeat to Manchester United.

Sunderland had gone eight games without a win in the Premier League under O’Neill before chairman Ellis Short opted to dispense with his services and take the controversial decision to replace him with Paolo Di Canio.

It was a bold move given the former Aston Villa and Celtic boss had inspired a team bereft of confidence and languishing in 16th place when he took over in December 2011, guiding them to a 13th-placed finish.

O’Neill told Radio 5 Live: “I am still pretty disappointed, frustrated as much as anything else but life goes on.

“I’m in the business now where I think very little shocks you about professional football especially in the last 10 years. You can lose a job in management if your tie doesn’t fit your suit.

“With the experience I have had over the years ... also coming into the football club at a time when the club was pretty well on its knees. I believed I saved it from relegation last year and I thought that opportunity should still have been afforded to me.”

Sunderland are 16th in the Premier League table and face a tricky run-in, starting on Sunday with a trip to face European champions Chelsea at Stamford Bridge.

1 Six Nations: Ireland are contenders but England still the team to beat
2 Owen Doyle: Creeping professionalism of schools rugby a threat to the game
3 In Donegal Michael Murphy is seen, simply, as a godsend
4 Mike Catt hopes to have Irish backs purring in Six Nations
5 Gary Neville in Qatar an exercise in semi-journalism
Real news has value SUBSCRIBE