Newcastle stay in touch at the bottom with vital Swansea win

Lascelles, Sissoko and Townsend all on target as Toon respond to Sunderland’s early win 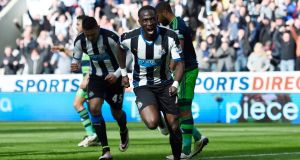 Townsend, a January signing from Tottenham, set up Jamaal Lascelles and skipper Moussa Sissoko either side of the break and then added a third himself with a minute remaining as the Magpies secured a first victory since February 6 to keep alive their hopes of avoiding the drop.

Swansea gave as good as they got for long periods in the game, but could do nothing to prevent Benitez’s men from collecting a first win in April since 2013 and send home the locals among a crowd of 48,949 with hope.

If Sunderland’s 3-0 victory at Norwich earlier in the day had not exactly barged the door wide open for their neighbours, it had at least unlocked it, but only if they could follow suit.

Benitez made five changes to his team, two of which meant that Jonjo Shelvey, a January signing from Swansea, started the afternoon on the bench alongside striker Aleksandar Mitrovic.

Newcastle started in committed fashion, if without the required quality, although Lukasz Fabianski needed every inch of his sizeable frame to keep out emergency full-back Vurnon Anita’s floated ninth-minute cross, the Swans goalkeeper getting down well to collect Townsend’s follow-up after the ball was recycled.

Sissoko, who had tasted victory only once before in six games wearing the armband, blazed high over after cutting in front the right six minutes later, but as Jefferson Montero and Gylfi Sigurdsson started to make their presence felt, the visitors worked their way into the game.

However, Fabianski was called upon once again 12 minutes before the break when Jack Colback ran on to Cisse’s intelligent flick-on, but could not beat the keeper with his left-foot strike.

Opposite number Karl Darlow was relieved to see Alberto Paloschi’s driven 35th-minute cross come off Sigurdsson and drop into his waiting arms, but it was his side who took the lead with four minutes of the half remaining.

Cisse did well to force a left-wing corner and when Townsend delivered the ball to the near post, Lascelles lost his marker Sigurdsson to power home from close-range.

But Swansea returned in determined mood and went close twice in quick succession as it took a fine block by Chancel Mbemba to keep out Andre Ayew’s shot before Paloschi glanced a header a cross the face of goal from Montero’s cross.

St James’ held its breath with 19 minutes remaining when central defender Ashley Williams was allowed to control the ball inside the penalty area and blast just wide, and there was even great relief when Montero fired wide after being played in by substitute Bafetimbi Gomis.

However, Newcastle finished in style when Sissoko powered home a second from close range after Townsend’s 82nd-minute corner had dropped nicely for him, and Townsend wrapped up the win at the end after being picked out by substitute Mitrovic.