Mourinho wants a new Spurs striker who will compete with Kane

Manager is considering letting Aurier leave, but would rather keep him 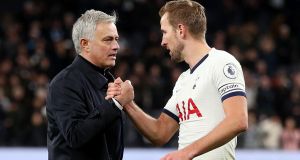 José Mourinho wants a new striker who will embrace the competition with Harry Kane rather than shrink from it, while he has told Danny Rose he has no future at Tottenham..

The manager also said he would consider letting Serge Aurier leave, although he would rather keep him.

Mourinho was keen to sign a centre forward in January as he does not believe Son Heung-min has the qualities to play there – meaning Kane is his only recognised senior No 9 – and he was upset when he could not get one.

Mourinho is now even more eager to sign a player to partner or support Kane as he addresses a start to the season that he described as “not human”.

Spurs could play nine times in 22 days because of their involvement in the Carabao Cup and Europa League qualifying rounds. Mourinho wondered whether “they want us to play with the youth team in the Carabao Cup”.

Spurs have struggled to sign strikers as potential arrivals fear they will not get sufficient minutes because of Kane. But Mourinho has said that if a centre forward is scared of the England captain then he does not want him.

As in January, he is looking for a target man. “If the striker is afraid to come to Tottenham and he is afraid of competition then I don’t want him,” Mourinho said. “All the other top clubs have many options as centre forwards, and this question doesn’t appear.

“It looks like it’s only us where we don’t have the right to have a more balanced squad with more options. Players decide who plays, not me. The striker that comes here has to come with his own ambitions.”

Rose, who was on loan at Newcastle from January to July and has entered the final year on his contract, is of interest to Genoa, who finished fourth bottom of Serie A last season. He did not kick a ball in pre-season, and is at the bottom of the left back pecking order.

“It’s very difficult for him to stay here when for me it’s clear that Ben Davies is such a solid left back and Ryan Sessegnon is an investment by the club,” said Mourinho, who also gave minutes to 18-year-old, Dennis Cirkin in pre-season.

“The club knows I’m more than happy with the players I have in the left-back position, and that I would be happy for Danny to leave. If he goes to Serie A and Genoa it’ll be very good for him.”

Mourinho said he had not signed right-back Matt Doherty so that he could sell Aurier. But he added: “The players have the right to express themselves and to try to be happy, and if Serge comes to us and a situation that he would prefer we would speak with him.”