Michael Walker: Lewandowski the least of Wolfsburg’s worries after Volkswagen get nabbed 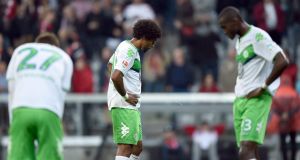 Wolfsburg’s Maximilian Arnold, Dante and Josuha Guilavogui react after their side lost 5-1 to Bayern Munich in the Bundesliga, with Robert Lewandowski scoring five goals in nine minutes. Photograph: Michael Dalder/Reuters

One of the phrases we reach for increasingly often is football’s “bubble”. This is not in the innocent sense of West Ham and Upton Park; rather, it is an expression of our distaste for another phrase we employ – “modern football” – and all the economic flamboyance, waste and exploitation the term suggests. Bubble means bling, self-absorption, irresponsibility.

The game/sport/industry exists in other realms, though, and some of these are more appealing. An example came from Germany of the sheer power of football when fans held up banners saying “refugees welcome” a few weeks ago, gestures that appear to have informed Angela Merkel’s policy-making shortly after.

That was an intrusion of football into real life and this week, again in Germany, we have had the reverse. Volkswagen’s emissions deception has plunged a worldwide company into chaos and financial woe, and though it will understandably hardly figure on the radar of climate change campaigners, the VW scandal has reached football and Manchester United.

Next Wednesday United have their second Champions League group game and having lost at PSV Eindhoven in the first, when Luke Shaw was so cruelly hurt, United must beat the next opposition: Wolfsburg.

The Germans won their opening group game 1-0 against CSKA Moscow and from that perspective can travel to Old Trafford relatively relaxed. Wolfsburg must have been feeling pretty pleased with themselves on Tuesday night too, given they were 1-0 up at half-time at Bayern in the Bundesliga.

At half-time in Munich, Wolfsburg were third in the table, having finished second to Bayern last season. Then they were hit by Lewandowski and VW and we do not know where this will end.

According to some, this kind of speculation is fanciful. Klaus Allofs, a man of 56 West Germany caps in the 1970s and ’80s, is now sporting director of Wolfsburg, though he never played for them.

Allofs told the German football magazine Kicker this week: “Of course we discuss it [the crisis] on the board,” only to add: “We have not discussed the effects on VfL.”

The reason for this omission, Allofs said, was: “I believe that’s not necessary. The VfL commitment has a great meaning.

“And it will not be automatically questioned by a crisis. We know the value VfL has for Volkswagen. And I believe this value will not change.”

Is this a bubble? Is this a football man who has not yet fully extrapolated what VW’s imminent billions lost on fines and compensation means? It could be.

Maybe Allofs is correct. Wolfsburg host bottom club Hanover this afternoon and, even in the wake of Lewandowski and VW, there should be three points collected.

Manager Dieter Hecking may be able to rest players prior to Old Trafford. Dante, the centre-back signed from Bayern, and Julian Draxler, brought from Schalke for €36m on the last day of the transfer window, are key men.

Lest the impression be given that 22 year-old Draxler’s recruitment was an example of Volkswagen’s funding largesse, he was bought in part with the money the club received from Manchester City for Kevin de Bruyne and Inter Milan for Ivan Perisic. They were two of the players who helped turn Wolfsburg into a team that hammered Bayern 4-1 in January and provoked Pep Guardiola to declare Wolfsburg “challengers”.

De Bruyne scored two that day and he scored another in the German Cup final victory over Borussia Dortmund.

Volkswagen sponsor that competition, part of an investment in German soccer that runs into millions annually. But it is VfL Wolfsburg where VW is centred.

The town and the club are a recent phenomenon, well compared to, say, Nottingham and Notts County.

When the Bundesliga was formed, which was as late as 1963, Wolfsburg were in a regional northern league.

It was not until the 1990s that the club made serious progress, climbing into Bundesliga Two, then the top flight.

Not until 2009, though, were Wolfsburg champions of Germany. Felix Magath was the manager.

Traditionalists did not welcome this development. Volkswagen were alleged to be pumping in anything from €80-€100 million per annum and the car plant team simply did not warrant respect – to much comment they did not fill the ground for the CSKA match.

Wolfsburg have encountered some of the issues Blackburn Rovers, Chelsea and Man City are familiar with.

Blackburn faded after the death of steel magnate benefactor Jack Walker and while reports of Volkswagen’s death may be exaggerated, it would be a remarkably resilient football bubble which outlasted this VW crisis.

Manchester United will face a decent Wolfsburg team on Wednesday, but that is because of the recent past.

Volkswagen’s uncertain future means the two clubs might not meet next year, or the one after.