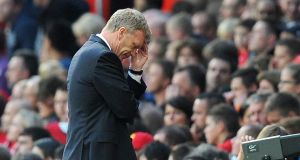 Michael Carrick has admitted the Premier League table does not make comfortable reading for Manchester United.

Saturday’s 1-1 draw with Southampton at Old Trafford leaves United anchored in mid-table, with the same number of points as newly-promoted Hull. The meagre haul of 11 from eight games represents the club’s worst start to a league campaign for 24 years, when the infamous “Ta-ra Fergie” banner was unveiled and United finished in their lowest position since the relegation season and would surely have seen Alex Ferguson sacked had he not won the FA Cup.

It is unthinkable David Moyes will be ousted. Neither is it particularly plausible United will end the season in the bottom half of the Premier League. For now though, it does not look good.

“It is not easy reading now,” said Carrick. “Looking at the table as it is now is not something we are used to. It is frustrating because things are not going the way we want. But as players we have to stand up, take responsibility and get better.

“We just have to keep believing. We are still confident. Everything is in place but for some reason, at the moment, we are not quite clicking and not quite firing.”

It is true United created enough chances to have sealed victory long before Southampton’s late leveller. Wayne Rooney and Robin van Persie both hit the bar, youngster Adnan Januzaj had a fierce shot beaten away by Artur Boruc, who also denied Nani with a near-post save. And had Morgan Sneiderlin not slid in to rob Danny Welbeck, the youngster would surely have set Rooney up for a tap-in.

As it was, United headed into the final couple of minutes trying to hold onto the first-half lead given to them by Van Persie’s first Premier League goal in open play for two months. And they did not manage it.

“Having won at Sunderland we wanted to really kick on,” said defender Phil Jones. “Although we haven’t lost we are still disappointed. It’s so frustrating. We controlled the game but we could have done with that second goal and in the end we’ve conceded a sloppy goal at the other end.”

The scorer of Southampton’s equaliser is a matter of debate. Referee Mike Jones thought it was Dejan Lovren, who prodded Luke Shaw’s corner goalwards. TV replays indicated Adam Lallana then got the faintest of touches to send the ball past David de Gea from point-blank range.

Either way, it kept Southampton among the pacesetters, while denying Moyes his first back-to-back league wins since replacing Ferguson in the summer.

At the start of a week that will be swamped with Ferguson’s observations of life as his eagerly-awaited autobiography is released, it looks increasingly like the single trophy Moyes’ predecessor feels is required this season will have to come in a competition other than the one United have won 13 times in the past 21 seasons. Everywhere at the moment there are questions for Moyes to answer.

The €30 million invested in Marouane Fellaini does not, at present, look good value for money. Moyes’s decision to replace Rooney with Chris Smalling just before Southampton scored has been criticised for being too defensive. Indeed, the major positive to come out of yesterday for United was confirmation Januzaj had signed a five-year contract extension.

And Jones, himself propelled into the big league as a raw teenager at Blackburn, is expecting big things from the 18-year-old.

“It’s massive pressure coming into the Premier League at such a young age,” said the England man. “It’s a testament to him he has done such a great job. He’s sharp, he’s got nimble feet and he will do great things for this club. He threaded a brilliant ball through for our goal. Adnan is only a quiet lad. He just goes about his business. But if he keeps producing performances like that he will be a real star.”