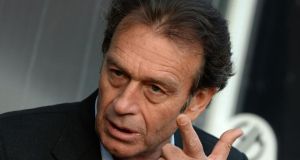 Massimo Cellino has been given permission by the Football League to attend Leeds’ final game of the season at Elland Road against Rotherham. Photo: Tony Marshall/PA

Cellino, back in office at Elland Road following the expiry of his Football League ban, said he “is in love with Neil” but has yet to hold talks with the former academy manager and is still undecided on his future.

“I need to decide whether Neil is best for the club and can lead us back to the Premier League, ” Cellino told freelance journalist Simon Austin.

“I am in love with Neil and I don’t want to talk to anyone else about the job. I have always believed in him and I gave him his big chance.

“I made sure he had a clause guaranteeing he would pick the team because I don’t want a coach I control.

“If my coach is working in the right direction I will treat him better than anyone else in the world.

“I have made a lot of mistakes in my life and I don’t want to have this.”

Redfearn, 49, has made it clear he wants to continue in the job but wants certain assurances from Cellino, including the return of assistant Steve Thompson, who was suspended without explanation last month in the Italian’s absence.

Cellino, 58, and chairman Andrew Umbers are both understood to have spoken to Thompson via telephone and the former Huddersfield coach declined an offer to attend the club’s end-of-season awards dinner last weekend.

Thompson is currently consulting with the League Managers’ Association after being notified by letter in early April that he had been suspended until his contract expires at the end of the season — less than four months after being appointed.

Cellino resigned as club president in January after losing his appeal against the Football League’s decision to disqualify him as a “relevant owner” until April following his conviction for tax evasion in Italy.

The ban was then extended until the end of the season following Cellino’s failure to disclose court documents, which had confirmed non-payment of tax on his yacht had been a dishonest act.

Director Umbers was appointed as chairman in January following Cellino’s departure and the Italian has expressed his disappointment at how the club has been run during his three-month absence.

“Nothing has been sorted out and instead there is just s***,” Cellino added.

“When I left, everyone was looking after their own skin rather than what was good for the club.

“Everything needs sorting out for next season — the sponsors, ground, lights, even pre-season.

“They told me we were booked for the pre-season. Then I find out the Liverpool under-17s are booked at the same place and there is only one training pitch. Amateurs.

“We also need a head of press, a head of the academy, a sporting director, a club secretary.

“This is unbelievable and quite scary. Andrew Umbers is a nice man, but this is hopeless.”

Umbers, it is understood, will remain as a club director but Cellino will become chairman/president.

Among one of Cellino’s first tasks will be a meeting on Thursday with officials from the Football Association, which is investigating the possible issue of third-party ownership in relation to last summer’s signing of Brazilian midfielder Adryan.

Cellino insists the club did nothing wrong during the transaction and had been careful to check this with the game’s authorities at the time.