Man City close in on title after Everton win 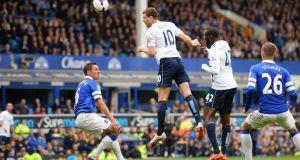 Anything other than a City victory would have handed the initiative back to Liverpool but three points put them top of the table on goal difference with Chelsea to play Sunday and the Reds a day later.

Everton, despite many fans claiming they would be happy to lose in order to help stop their near-neighbours’ title bid, needed a win themselves to stay in the hunt for the Champions League but defeat handed fourth spot to Arsenal 24 hours before they play.

Having proved they would not be rolled over by taking the lead through a Ross Barkley wonder-strike and fighting back through Romelu Lukaku’s header, Everton were ultimately left empty-handed as Edin Dzeko’s brace and Sergio Aguero’s 17th Premier League goal earned City the spoils and the advantage in the title fight.

If they win their remaining two matches at home to Aston Villa and West Ham, City cannot be caught irrespective of what their rivals do in their final two fixtures.

Any questions about Everton’s players appetite for the win which would open the door for Liverpool was answered brilliantly in the 11th minute.

Barkley showed just why England coach Roy Hodgson should take him to Brazil this summer with a strike which would have graced any World Cup.

Leighton Baines and Steven Naismith combined down the left to tee up the 20-year-old who hit a sublime first-time shot from 25 yards which flew past goalkeeper Joe Hart and into the top corner.

All the pre-match chatter may have been about Evertonians being quite happy with a visiting win but the way Goodison Park celebrated suggested otherwise.

The game opened up with Yaya Toure curling over after cutting inside on his right foot while Barkley’s dangerous dribble into the penalty area was halted only by a superbly-timed tackle by Vincent Kompany.

Then came one of those moments when fate seems to play a significant part.

All the intimations from Aguero were that he could not continue with an apparent groin problem, but while City were readying his replacement Toure slid through an inviting pass and the Argentinian’s predatory instincts took over as he skipped past Antolin Alcaraz to beat Tim Howard all-too easily at his near post.

The outcome of hasty discussions on the touchline was to leave Aguero on but he lasted just five minutes before being replaced by Fernandinho, which actually improved City in a way as it pushed Toure further forward but gave Pellegrini’s side greater dominance in midfield.

Everton switched from their experimental 3-4-2-1 formation to 4-1-4-1 to try to combat the loss of control but whether the changes affected the defence or not Dzeko’s free header for City’s second – after he had almost beaten Howard at his near post again – came far too easily for the Bosnian.

How the hosts wished their own striker was as sharp in front of goal as Lukaku, having not scored in four games, ballooned the last chance of the first half high into the Gwladys Street End.

Barkley remained Everton’s one driving force and a powerful run from halfway just after the break set up Naismith one-on-one with Hart only for the goalkeeper to tip his shot around the post.

It was a pivotal moment as City went straight down the other end and Fernandinho picked out Samir Nasri who crossed for Dzeko to sidefoot home.

Barkley continued to lead the charge, demanding the ball at every opportunity, but unfortunately many of his team-mates were not on the same wavelength.

Lukaku seemed so out-of-sorts he appeared to be no threat to City’s defence but he was having one of those games, which he frequently has, where he did nothing for an hour only to come alive in the last 30 minutes.

True to his inconsistent form he popped up in the 65th minute to head home a Baines cross to make it 3-2, and if Everton needed any more incentive there followed the sight of Toure heading for the bench to be replaced by Aleksandar Kolarov.

Roberto Martinez replaced Phil Jagielka, making his first appearance for 10 weeks, with forward Gerard Deulofeu as they went for the win to keep alive their Champions League hopes but Howard kept them in the game by saving from Pablo Zabaleta.

Deulofeu’s weaving run and shot was deflected into the side-netting and with it went their faint hopes of a top-four finish.

City’s hopes of regaining the title they won in 2012 remain very much alive, however.