‘I can’t forget as it was something I had to suffer, that my family had to suffer and away from football I have a family to support, who are hurt by these things’ 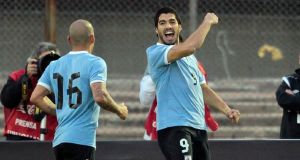 Liverpool striker Luis Suarez has reiterated his love for the club, but again insisted that he needs to leave Anfield.

The Uruguayan star is currently in South America preparing for the Confederations Cup, having already this summer revealed that he wants to leave the club.

Liverpool have insisted that Suarez, who is currently banned from domestic football in England after biting Chelsea’s Branislav Ivanovic, is not for sale. But Suarez believes that he has to leave because of his treatment from the British press.

“Ever since I arrived I have felt bad, they have never judged me for my play but with the attitude that he dives, protests, makes gestures, racism... everything,” Suarez told television show RR Gol. “They have never spoken well of me. For that reason, when I was told I could win the Player of the Year award, I said: “I will not get excited as I know that I will never win an important award in England.”

Suarez also feels like the English authorities are against him, comparing his ban for racial abusing Patrice Evra to that of John Terry, who was banned for half the amount of games after a similar incident with Anton Ferdinand.

“Without any proof they gave me an eight match ban, but with Terry, where they had proof, lip-readers, they gave him four, I’m South American and I think that’s the root of all of this,” he continued, admitting that despite his love for the club - he cannot see himself staying.

“Liverpool is a club that I dreamt about playing for as a boy. I have been with great players there, they know me and I would love to continue for many more years at Liverpool. The stadium is spectacular, the fans are phenomenal: people with tattoos of me, things that I could never have imagined.

“After the [EVRA]suspension people would come up to me, this is something that really touched me and they would say: ‘Luis forget everything and stay.’

“But I can’t forget as it was something that I had to suffer, that my family had to suffer and away from football I have a family to support and who are hurt by these things.”

Asked again where he sees himself going, should he leave he said: “My agent said to remain calm rather than quiet, remain calm and when there is concrete interest you’ll be the first to know.”

Suarez also recounted a recent incident during a shopping trip, which affected him and his family.

“About a week ago I was walking in a shopping centre near Manchester and three or four guys asked me for a photo,” he revealed. “While we were posing for it my wife said to me “Luis, get out of the photo”. She noticed they were making biting gestures. I was with my wife and my daughter. Things like that get on your nerves. My wife was on the brink of tears and the blokes ran off laughing. You get tired of stuff like that.”

Suarez has already declared that he would be open to a move to Real Madrid and that remains the case.

“I’m not sure if I see myself in the white (of Real Madrid), the only thing I know is that I have a contract,” he said. “Any player would like to play for a great team and Real Madrid certainly are that. Every player wants to reach the very top and Real Madrid are at the very top, but everything that has been said is just rumours, I have had nothing concrete.

He admits that he and compatriot Edison Cavani don’t speak about their respective futures.

“We have never really spoken about whether this club or that is interested. Obviously we talk about football; he asks me about the Premier League and I ask him about Italy, ” he said. “But we have never talked or even even joked about one of us going to one club or another. I would prefer to have him as a team-mate than a rival because he is a great player. Hopefully he will go to one of the four you dream of because he has great power.”