Louis van Gaal confirms he is recruiting a new striker

Manchester United are offering free shirts in an effort to fill an 18,000 venue 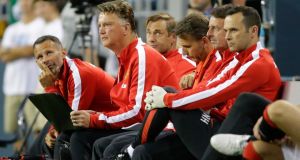 Louis van Gaal has confirmed Manchester United are in the process of recruiting a new striker.

Senior sources at United were insistent last week that the Red Devils were not after a new front man, but after United’s 1-0 win over Club America at the weekend Van Gaal hinted a “surprise” signing might be in store.

And on the eve of United’s second tour match in California against the San Jose Earthquakes, the United boss again dropped a cryptic clue which suggested a forward could be coming to Old Trafford.

“He is in the process,” Van Gaal said bluntly when asked about his “surprise” signing.

When asked whether United where close to signing the striker in question, Van Gaal said: “No. It is not a striker that the media has written, but you have to wait and see.

“The transfer period is open until September 1st. You have to wait.”

United have been linked with a number of forwards in the last few weeks, including Paris St Germain’s Edinson Cavani, Tottenham’ Harry Kane and Robert Lewandowski from Bayern Munich.

A German newspaper claimed United had bid £70million for Lewandowski’s team-mate Thomas Muller on Monday, but sources at Old Trafford denied an offer had been tabled.

Van Gaal seemed to enjoy toying with the media who peppered him with questions on the eve of the game at the Avaya Stadium in San Jose.

When asked whether United were any closer to signing Real Madrid defender Sergio Ramos, who they want to bring in as part of a swap deal for David de Gea, Van Gaal said: “I cannot talk about these rumours. I have said already in a lot of press conferences, it is a process. Maybe Mr Ramos is in the process. You never know.”

De Gea, absent for the match in Seattle, will miss the second match of the tour, along with Antonio Valencia.

“They have visited the hospital this morning. That is confirmed. They cannot play against San Jose I don’t think, but we shall wait and see.”

It is understood that De Gea should be fit for United’s second game in California against Barcelona on Saturday.

Javier Hernandez will join the squad on the day of the Barca game but is unlikely to feature.

That means Wayne Rooney will once again lead the line for United against San Jose, who are offering free United shirts to those who buy tickets in an effort to fill the 18,000 venue, which was selected at short notice after Van Gaal decided he did not want to play in a bigger stadium in Berkeley because of travel issues.

Although United may sign another striker, Van Gaal will place high demands on his captain, who has been told he will play up front, rather than in midfield this season.

“I expect from him the same as I expected from (Robin) Van Persie or (Radamel) Falcao. The principles are still the same,” Van Gaal said.

This time last year Van Gaal was weighing up whether to appoint Rooney or Van Persie as captain.

He clearly thinks he made the right choice.

“I could not expect more,” Van Gaal said when asked about Rooney’s first year as captain.

“I think he is a great captain. Better than I had expected. He is fully accepted by the players.

“I can choose, but the players decide. That is my philosophy. The players have to accept the captain. The first captain is Wayne Rooney.”

Van Gaal said he had no fears about Rooney getting injured in Duncan Ferguson’s testimonial, which takes place six days before United’s season-opener against Tottenham.

“He can also fall off the stairs. That is my answer,” Van Gaal said.

Meanwhile Paris Saint-Germain have announced the signing of midfielder Benjamin Stambouli from Tottenham on a five-year contract. Stambouli, 24, joined the London club from Montpellier, but has opted to move on after just one season at White Hart Lane.

Stambouli, who made 25 appearances for Spurs in all competitions, said: “I am delighted and very proud to become a member of the Paris Saint-Germain family.

“I wasn’t necessarily planning to leave the Premier League after one year, but when a club the size of Paris Saint-Germain calls you, it makes your choice a lot easier. That’s the moment when you can experience the power of attraction surrounding this club. I will now focus on my preparation.”

Stambouli, whose only Tottenham goal came in a Europa League match against Partizan Belgrade in November, will join his new team-mates at their pre-season training camp in New Jersey.

PSG president Nasser al-Khelaifi said a return to France would help “rediscover a player who was full of promise when he was playing in Ligue 1”.

Stambouli becomes the latest midfielder to leave Spurs this summer, following the exits of Paulinho, Lewis Holtby and Etienne Capoue.