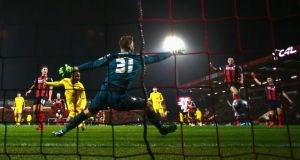 Liverpool at last have some respite. A side left traumatised in the Champions League and so horribly off the pace in the top flight have conjured some composure in the League Cup with a semi-final to follow in the new year. Bournemouth were eliminated here, not straightforwardly but ultimately with something to spare, to fire Brendan Rodgers’ hopes of claiming silverware. This may prove to have been a timely shot in the arm.

Raheem Sterling, his hair clipped but zest and conviction restored to his game, secured the rewards on the south coast that had eluded him at Old Trafford over the weekend to secure passage against the best side at present outside the elite division. Liverpool had too much bite going forward, even with Mario Balotelli absent and Rickie Lambert anchored to the bench. It was the fluidity of their movement which bypassed Bournemouth, a measure of assuredness having returned to their delivery. The true test now is whether the same pace and precision can be implemented against Arsenal on Sunday.

This had been helter-skelter from the outset, two teams brimming with pace tearing into each other as the drizzle set in and the ball skimmed at pleasing pace over the slippery surface. Adam Smith’s barnstorming early run, nut-megging Steven Gerrard en route, set the tone to have the locals bellowing approval. Yet if the visitors had arrived on edge given recent toils, they had also clearly sensed an opportunity to restore some momentum to their campaign.

Once Bournemouth’s early urgency had fizzled out, choked by Callum Wilson’s wasteful fourth-minute prod wide from close range, Liverpool imposed some class amid the frenzy. Their lineup was bold, a system devoid of natural full-backs or, indeed, wing-backs with Raheem Sterling resuming his role in the middle of a front three in the hope the clever movement that had stretched Manchester United on Sunday would be allied with more accurate finishing this time round.

There was a logic to that and reward midway through the opening period when the England forward converted his first goal in three months. It was the quality of that conversion which set the Premier League side apart and, in the process, deflated their hosts. Liverpool probed patiently down either flank, enjoying almost two and a half minutes of pinged possession while the home side were steadily pulled out of position and lost their discipline.

Frustration mounted in the stands before Lazar Markovic deemed Bournemouth prone enough to loop a centre beyond the far post where Jordan Henderson had eked space from Smith. His header back was nodded in by Sterling goal-side of Baily Cargill. Sterling’s first headed goal for the club was the 52nd touch of the move. Bournemouth had been made to look utterly helpless.

The lead offered Rodgers’ team a chance to flourish on the counter-attack, authority restored to the visitors’ approach almost in an instant, and they duly capitalised. Artur Boruc had already denied Adam Lallana, once of Bournemouth’s centre of excellence, from distance and home defenders were forced into a series of blocks to snuff out battered attempts from those in fluorescent yellow when Markovic, nominally a left wing-back, liberated Coutinho.

The Brazilian was allowed to cut inside while defenders appealed in vain for an offside flag before Boruc saved his shot at the near post. The loose ball flew out to Markovic on the edge of the box and he curled in a first Liverpool goal with aplomb. It was a sloppy concession, too many home defenders having hesitated in the build-up to the goal most likely as a result of one home supporter in the north-west corner of the ground having blown a whistle, presumably to put off the attacking players.

That noise had prompted Tommy Elphick to turn his back on play for a split second, his arm raised, and presented Courtinho with his chance to shoot. The Cherries’ captain complained bitterly to the officials while Liverpool celebrated, even if his team did at least muster an immediate response. Simon Francis burst to the by-line and cut back for Yann Kermorgant but the unmarked Frenchman’s attempt from just inside the area was wild.

Bournemouth have not been used to chasing contests in recent times, their recent form having yielded nine wins in 12 matches in all competitions and a lofty perch on top of the Championship. But their every error was being punished here. When possession was surrendered yet again in the centre, Kolo Touré spread the play well to Lallana and he clipped Sterling clear. The forward ran mercilessly at Elphick, the centre-half left dizzied by the close control, before dispatching the third into the far corner.

Dan Gosling, formerly of Everton and a player who has found this competition profitable, immediately benefited from Matt Ritchie’s pass and the all-too-familiar uncertainty in the Liverpool back line to dispatch a shot through Mamadou Sakho and Brad Jones. Yet his sixth League Cup goal of term proved nothing more than a consolation. Gosling curled another attempt off the post with Jones aghast and, twice, the substitute Ryan Fraser might have registered, but Liverpool escaped further damage. This competition could yet kick-start a revival.