Leeds have sold a minority stake to the San Francisco 49ers 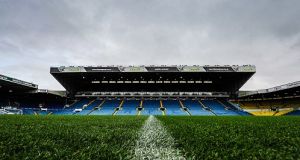 Paraag Marathe, president of 49ers Enterprises and their executive vice-president of football operations, has joined Leed’s board. Photograph: Getty Images

Leeds have sold a minority stake in the club to the San Francisco 49ers’ investment group.

Reports from the UK say the NFL franchise have invested £10million in the Sky Bet Championship side.

“This strategic partnership enables Leeds United to align with and gain invaluable expertise from the owners of one of the biggest global sports entities,” said Leeds owner Andrea Radrizzani.

“The 49ers are an innovative, successful organisation and we are delighted to have access to such a rich source of business and sporting expertise.

“This exciting partnership builds on the foundations we have laid down at the club in the last 12 months and we can assure supporters that the funds invested will go towards improving results on the pitch.”

Leeds said that as part of the deal, Paraag Marathe, president of 49ers Enterprises and their executive vice-president of football operations, has joined the West Yorkshire club’s board.

Marathe told Leeds’ official website: “There was a kinship there (with Radrizzani) — a professional and personal kinship, we thought there are a lot of things we could do to help each other, and we just started to dive in and get involved.

“The San Francisco 49ers are one of the most prominent franchises in all professional sports, and certainly in the NFL.

“Similar to Leeds, we have a storied history with a lot of Hall of Fame players, a lot of great players. We’re actually right in the middle of building a foundation and getting the 49ers back to where they belong, at the top of the NFL.”

Marathe added: “It’s right in the nascent stages right now of getting back to where Leeds United belongs.

“There’s a lot of good learnings that we can take, that we do in the NFL, and take it over here to the UK. This isn’t rocket science, you’re trying to take smart ideas, apply them somewhere else and turn teams into winners.”