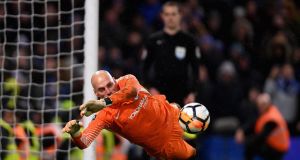 In extra-time at Stamford Bridge, and with the teams tied at 1-1, Blues winger Willian appeared to be tripped in the box by City defender Timm Klose.

Referee Graham Scott booked the Brazilian for diving but replays showed there was clearly contact – yet no penalty was awarded.

Alan Shearer branded the VAR system “a shambles” while his fellow BBC pundits agreed it should have been a spot-kick.

Chelsea’s frustration boiled over in the second period of extra time with Pedro and Alvaro Morata sent off, both after being booked for diving.

After a goalless first half, in which both sides rattled the crossbar, Michy Batshuayi marked his 50th Chelsea appearance with his first goal since October.

Nine minutes after the break Kenedy sent in a low cross from the right and the Belgian striker arrived at the near post to smash the ball into the roof of the net.

But deep into stoppage time Klose whipped in a cross and Jamal Lewis cushioned a fine header into the back of the net.

Extra time could not separate the sides but Eden Hazard hit the winning spot-kick as Chelsea won the shoot-out 5-3 to book a visit from Newcastle in the next round.

League One leaders Wigan Athletic will welcome West Ham in the fourth round after demolishing another Premier League side, Bournemouth, at the DW Stadium.

Sam Morsy, Dan Burn and Callum Elder all scored on a chastening night for Eddie Howe’s team. Perhaps Wigan will sense history repeating itself: they also beat the Cherries after a replay at the same stage of their glorious 2013 campaign.

Morsy gave Wigan a dream start. The chance arose after Will Grigg had been denied by Artur Boruc, who could do nothing about Morsy’s cool follow-up. The Wigan goalkeeper James Jones then did well to deny Benik Afobe, although the next major talking point was a scything tackle from Harry Arter on the hosts’ Ryan Colclough. Arter was booked but could count himself fortunate not to be sent off.

Bournemouth prepared a salvage operation and came close through Ryan Fraser, whose effort was blocked by Jones. But they were killed off 16 minutes from time, when Burn converted a delivery from Max Power. Almost instantly it was three and Power was the creator again, Elder rising high to score a looping header.

With relegation battles and promotion assaults to win, Swansea City and Wolverhampton Wanderers have far more pressing matters on their mind than making progress in the FA Cup this season, yet the Premier League club will still cherish the confidence that a rare home victory could provide.

Wilfried Bony’s predatory finish, three minutes after Diogo Jota had come off the bench to cancel out a splendid solo goal from Jordan Ayew that was totally out of keeping with the occasion, inflicted Wolves’s first defeat in 15 games and secured Swansea a place in the fourth round and a trip to play Notts County at Meadow Lane on Saturday week.

Nuno Espírito Santo, the Wolves manager, will not be losing too much sleep about the outcome. The Midlands club enjoy a 10-point lead at the top of the Championship and it is easy to see where their priorities rest this season. As for Swansea, their focus will swiftly return to trying to haul themselves off the bottom of the table.