‘It could be a blessing in disguise. It’s going to be even tougher this year,’ says Chelsea skipper 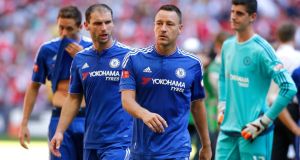 John Terry said that defeat to Arsenal in Sunday’s Community Shield could serve as “a wake-up call” to his side as they prepare to defend their Premier League title.

The Chelsea captain said: “It was a different atmosphere in the dressing room afterwards. We haven’t lost many at Wembley. With that in mind, it’s maybe the boost we needed and we go again for the season.

“It could be a blessing in disguise for us – a wake-up call. We have experience in the squad, we have the character. It’s going to be even tougher this year.”

The loss brought an end to Chelsea’s run of 13 matches unbeaten against Arsene Wenger’s side, but the 34-year-old defender played down the significance of his side’s run against their rivals.

“It’s disappointing because it hasn’t happened too many times since I have been at the club. Losing is just horrible in all respects.

“Forget the record, there was a trophy on the line. It hurt when you saw them walk up the stairs to lift it. When you see them walk up, no matter if it’s a friendly or a Community Shield, it’s a trophy.

“That’s the mentality I was brought up in, that’s the same as the manager on a daily basis. That’s what he wants and demands from his players as well.”

“It’s served a good purpose for that, but obviously we’re disappointed we didn’t win.”

Chelsea’s defeat leaves them without any wins from their four pre-season matches to date, including a 4-2 defeat to New York Red Bulls. Arsenal, in comparison, have won five out of five.

“Yet Terry’s central-defensive partner Gary Cahill was keen to play down the significance of the summer results.

“Preseason is false in many ways because you’re changing the team, everyone’s getting minutes, everyone is trying to get fit and you’re training hard. You’re doing double training sessions before you play a game. We still have another week of that before we get down to business.

The Blues faced their former goalkeeper Petr Cech for the first time since his £10 million (€14 million) move to Arsenal, and Terry was unsurprised by a solid display from the Czech.

“It was typical from Pete – great as always. I think we have to get over the fact he’s left now.

“We have enough in our squad to concentrate on ourselves. We have another game on Wednesday [against Fiorentina], which will give a few other players and the late arrivals a chance to get a few more minutes.” Guardian service

1 St Michael’s conveyor belt showing no signs of slowing down
2 Munster mood will be determined before kick-off
3 Pitchfork pundit Joe Brolly taking the subscription TV dollar? Say it ain’t so!
4 Welcome to Iten in Kenya – home of champions and cheats
5 Weekend GAA previews: Club All-Ireland honours to be decided on Sunday
Real news has value SUBSCRIBE