Tim Sherwood under huge pressure after Villa lose to Swansea; wins for Watford and West Brom 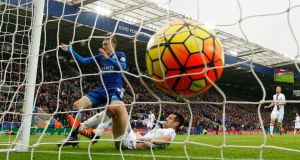 Jamie Vardy scored the only goal of the game and created a little piece of history in the process as Leicester edged to a 1-0 win over Crystal Palace.

In the build-up to the match Palace manager Alan Pardew spoke of his admiration for Vardy, who like himself reached the top flight relatively late in his career after progressing through non-league football.

By his recent standards it was a relatively quiet afternoon for the busy striker but there was much to admire about the finish from Vardy that won the contest. However, Pardew would have found little to like about his team’s defending which presented him with the chance to score his 10th goal of the season.

While manager Claudio Ranieri will be delighted for his fifth-placed side, a first clean sheet of the season – at the 12th time of asking – will please the Italian most.

Tim Sherwood’s reign at Aston Villa is in serious jeopardy after Swansea struck a killer blow at Villa Park.

Andre Ayew bagged a late winner as the Swans claimed a 2-1 victory to seal a first win since August and ease any pressure on manager Garry Monk.

But Sherwood is now under immense scrutiny at Villa after they blew a second-half lead to continue their winless run.

Villa have won just once in the Premier League this season and remain stuck in the drop zone, four points from the safety line, following a sixth straight league defeat.

Jordan Ayew’s first goal for the club was cancelled out by Gylfi Sigurdsson’s excellent free-kick.

It was a dramatic end to a terrible game but at least Swansea will take solace after they ended a six-match winless streak.

Troy Deeney notched his first goal of the season as Watford ended Stoke’s winning run by beating them 2-0 at the Britannia Stadium.

The Hornets skipper – who netted 21 times in the club’s promotion campaign last term – opened the scoring in the 43rd minute from a flick by fellow forward Odion Ighalo, moments after each player had hit the crossbar just seconds apart.

Almen Abdi wrapped things up in the 69th minute following a mistake by Marc Wilson to spoil Mark Hughes’s 100th game in charge of Stoke, who had gone into the match looking for a fourth straight Premier League victory.

The result sees Quique Sanchez Flores’s side leapfrog their hosts in the table, moving up to 13th while the Potters slip to 14th.

Norwich were looking to bounce back from a galling defeat at Newcastle last Sunday but could not make their early dominance pay as West Brom secured a narrow 1-0 victory.

Canaries boss Alex Neil dropped both of his full backs following the 6-2 hammering on Tyneside but Norwich could not breach a solid backline from the visitors.

With games against Manchester City, Chelsea, Arsenal and Manchester United to come in their next six Premier League fixtures, Norwich needed a result here but were toothless when it mattered – with West Brom’s record signing Rondon heading home less than a minute into the second half.