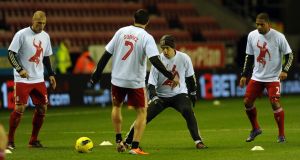 Jamie Carragher has admitted Liverpool made a “massive mistake” by backing Luis Suarez in the 2011 racism row with Patrice Evra and apologised to the former Manchester United left back.

Suarez was given an eight-match ban by the Football Association after being found guilty of misconduct for using insulting words to Evra, which included a reference to the defender’s colour, at Anfield in October 2011.

Liverpool’s players — including Carragher — responded to the suspension by wearing t-shirts with Suarez’s face on before a Premier League match with Wigan in December 2011 in a show of support for their striker.

Former Reds defender Carragher, who was appearing on Sky Sports alongside Evra on Monday, accepts the club and players made an error of judgment.

“Apologies, we got it massively wrong,” said Carragher. “There’s no doubt we made a massive mistake.

“I’m not lying on that and saying I wasn’t part of it because as the club we got it wrong and I was vice-captain. I’m not sure who was actually behind it.

“What I would say is that maybe I, as an individual, lacked the courage to say I wasn’t wearing it.

“I don’t think everyone at Liverpool thought what we were doing was right.

“Your first reaction — no matter what someone does — is to support them even if they are wrong.”

Speaking about Liverpool’s decision to wear t-shirts supporting Suarez, Evra said: “I saw it. I was watching the game. I was like, this is ridiculous. It is unbelievable.

“I understand you always have to support your player because this is your team. But this was after the ban.

“What message do you send to the world? Supporting someone being banned because he used some racist words.”

Suarez and Evra left Liverpool and Manchester United respectively in the summer of 2014, while Carragher retired from playing in 2013.