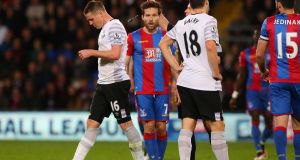 .James McCarthy of Everton is shown a red card during the Premier League match between Crystal Palace and Everton at Selhurst Park. Photo: Gareth Fuller/PA

It is probably just as well these clubs have FA Cup semi-finals looming large on the horizon because, at present, there is precious little joy for either to be had in the Premier League. The point secured here was arguably a minor triumph for Everton, a team whose top-flight form has drained as the campaign has progressed, given they played most of the second period a man down. Yet, even so, these are sides staggering towards the finish line.

At least the visitors could point to their players enjoying a level of chemistry on the pitch and showing resilience as Crystal Palace rallied desperately in pursuit of a winner. The goalkeeper Joel Robles was outstanding, albeit not tested enough by a team whose toils in front of goal have dogged them all term. This was a stalemate between two teams whose form has nosedived over the calendar year, though at least the visitors could cling more eagerly to the point gleaned.

There had been an initial sluggishness to Everton’s play that had not boded well for Martínez, his players scuffing their passes too often and finding ways to surrender possession far too easily with Palace, through the busy Jason Puncheon, Yannick Bolasie and Dwight Gayle, threatening to capitalise. The last of these almost punished John Stones for a poor defensive header only for his bicycle kick to drift agonisingly wide of the far post with Robles beaten, while Ramiro Funes Mori was just as close to slicing Wilfried Zaha’s centre into his own net. Palace, when allowed space on the flanks, were energetic and menacing.

Yet, by the time Funes Mori was breathing his sigh of relief, there was at least evidence the visitors’ poor early body language was improving. Their rhythm was more upbeat as the game progressed and Roberto Martínez, a manager who can spy positives in the direst of displays, surely departed at the interval encouraged that his team had enjoyed the more presentable opportunities from a scrappy Premier League contest.

Certainly Romelu Lukaku should have scored by then, latching on to Ross Barkley’s accurate pass inside Scott Dann only for Wayne Hennessey to block with his chest as he charged to the edge of his six-yard box. The Welsh goalkeeper had reacted just as smartly to turn away Séamus Coleman’s volley from Leighton Baines’s delivery. The full-backs had left the home side stretched and therein lay Evertonian promise.

Their key performers were certainly imposing more influence on proceedings, Barkley rousing himself from a sloppy first half showing to curl a sumptuous shot on to the crossbar upon the restart with Everton dismayed at the non-award of a penalty for Bolasie’s apparent trip on Coleman. Yet, from that promise, they still contrived to make matters complicated. James McCarthy, already booked for a foul on Puncheon, body-checked Bolasie on the halfway line to halt a counterattack and, from being dominant, the visitors were depleted.

The dismissal arguably heightened Palace’s anxiety, the onus very much on them to dominate and memories of Liverpool’s flourish with 10 men here recently still fresh. It is at times like this that their lack of bite can be properly exposed, though only Robles denied them reward. Twice he sprang to turn away Puncheon’s efforts, his reactions just as smart when Joel Ward and Yohan Cabaye spat efforts at goal. But it rather summed up Palace’s frantic and fruitless efforts when Emmanuel Adebayor nodded down and Connor Wickham miskicked horribly in front of goal. For all their attempts on goal, Palace had not done enough to merit success.