Harry Kane gets Tottenham’s title challenge back on track 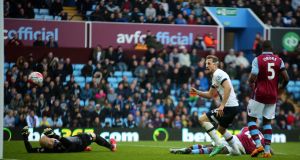 Harry Kane scores his and Tottenham’s second in the 2-0 win over Aston Villa at Villa Park. Photograph: Epa

Whatever the rights and wrongs of Mauricio Pochettino’s decision to field a weakened team at Borussia Dortmund, the Tottenham Hotspur manager will seize on this restorative victory as vindication of sorts as two goals from Harry Kane brought a first top-flight title in 55 years back into view.

Kane now has 22 for the season in all competitions, including 18 in his last 21 league games, and it will not escape Roy Hodgson’s attention that the gifted Dele Alli set up both goals for the England striker, the first with a clever free-kick and the second courtesy of an inviting low cross that was only going to end in one place.

It could hardly have been more comfortable for Spurs against the Premier League’s bottom club, so much so that it was tempting to wonder whether Pochettino could have rested players for this fixture, not the Europa League tie in Dortmund. All that can be said for sure is that Spurs at full strength had far too much class for Villa and from the moment that Kane scored his first, let alone the second, the outcome seemed inevitable.

This was only Tottenham’s third win in their last eight games and closes the gap at the top on Leicester, who take on Newcastle United on Monday, to two points. Spurs have played a game more but Pochettino and his players are entitled to feel this victory turns up the pressure on Claudio Ranieri’s side.

As for Villa, their disastrous season cannot end quickly enough. This was a fifth successive defeat, their 20th of the season in the league, and the mood among the supporters is mutinous. The biggest cheer of the day was reserved for a “Lerner Out” banner, which reappeared in the 81st minute after it had previously been confiscated. In a show of solidarity, Spurs fans started chanting “We want Lerner out”.

In a slightly surreal ending to the match Villa missed two absolute sitters in the final six minutes. Jordan Ayew, darting along the byline, struck the upright and when the ball dropped at the feet of Rudy Gestede the Villa striker inexplicably hit the bar from four yards out. Joleon Lescott, running onto Gestede’s flick on, was guilty of a miss that was every bit as bad a few moments later.

Although Spurs had to wait until the stroke of half-time for the breakthrough, the warning signs were there for Villa long before Kane’s opener. Their goal was living a charmed life, with Kane and Erik Lamela hitting the woodwork earlier in the first half and Brad Guzan overworked as the visitors attacked with menace.

The game was less than four minutes old when Kane, running on to Alli’s threaded pass, dinked the ball over the advancing Guzan and on to the top of the bar. It was the same two Spurs players who combined so lethally later in the half, when Alli’s quickly taken free-kick, midway inside the Villa half, picked out Kane, who had drifted out to the left flank.

Alan Hutton was caught the wrong side of Kane, with the Villa right-back’s poor positioning exposed by Alli’s sharp thinking, and Jores Okore was the man guilty of playing the Spurs striker onside. The rest was done with the minimum of fuss as Kane took a touch before drilling a low left-footed shot across Guzan and into the far corner.

If the timing of the goal was slightly cruel on Villa, they could have no complaints with the scoreline. Rémi Garde’s side frustrated the visitors for a while and had Gestede volleyed a yard either side of Hugo Lloris, rather than straight at him, Villa could have taken the lead in the 39th minute.

Yet it would have been a goal against the run of play after a first half in which Spurs created a number of opportunities. Kane, meeting Danny Rose’s low centre with a first-time shot from 12 yards, was denied by Guzan and two minutes later saw another effort parried by the Villa keeper.

Kyle Walker, running on to a superb diagonal pass from the excellent Toby Alderweireld, broke free on the opposite flank and picked out the unmarked Lamela, whose side-footed shot was touched onto the post by Guzan. The ball bounced off the prone Villa keeper’s back and Hutton hacked clear.

Guzan, however, ended up picking the ball out of the net at the start of the second half as well. It was a slick, flowing Spurs move and Kane was instrumental once again as he fed Lamela, who set Alli free in the inside left channel. Alli’s low cross found Kane, who nipped in front of Aly Cissokho to stab the ball into the roof of the net from six yards and the game was effectively over.