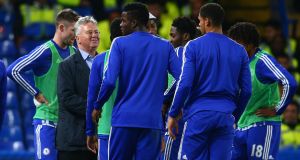 Guus Hiddink has addressed the full Chelsea squad for the first time and stressed that opportunities to win a competition this season and even climb into the upper reaches of the Premier League remain, despite their traumatic title defence.

The former Netherlands and Russia manager, who signed a six-month contract in the wake of José Mourinho’s dismissal last week and met some of the players at Stamford Bridge on Saturday, oversaw the first full training session of his second spell in interim charge. He was assisted by Steve Holland and Eddie Newton for the floodlit afternoon drills, geared towards preparing for the visit of Watford on St Stephen’s Day.

But he gathered the players and staff in a briefing room prior to training to discuss the season’s remaining targets.

The tone of his message was upbeat, pointing to the positives he had witnessed in Saturday’s victory over Sunderland, and urging all to focus on the objectives that can still be met.

While Chelsea languish at 15th in the Premier League table, nine defeats in 16 games having cost Mourinho his job, they are 11 points off the top four with 21 matches still to be played. The busy festive programme offers a chance to recover some lost ground.

A Champions League knock-out tie against Paris Saint-Germain awaits in February, while they host Scunthorpe of League One next month in the third round of the FA Cup, a trophy Hiddink won in his previous spell back in 2009.

Newton, who has been heavily involved in scouting the club’s many players out on loan since a spell as Roberto Di Matteo’s assistant in 2012, will remain on the first-team coaching staff. But a part of his job will be to ensure greater involvement for those academy graduates whose senior careers appeared to stagnate under Mourinho.

The hope is the likes of Ruben Loftus-Cheek and Ola Aina will gain more game-time in the first-team and while Jamal Blackman is expected to join Standard Liege on loan, Belgian midfielder Charly Musonda may remain at the club in January.

Chelsea and Vitesse Arnhem have been cleared by the Dutch football federation (KNVB) of having an “improper relationship” after an independent investigation into links between the clubs.

A number of players have been loaned from the Premier League side to Vitesse, fifth in the Eredivise, over the past five years – Isaiah Brown, Dominic Solanke, Nathan, Lewis Baker and Danilo Pantic are currently in Peter Bosz’s first-team set-up – with the KNVB having sought clarity over the ownership structure in Arnhem. There had been allegations that Chelsea exerted a considerable influence over the Dutch club’s approach, but the KNVB investigation found no written agreement between the clubs with all loan moves above board. Guardian Service