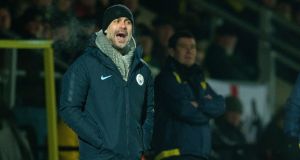 Pep Guardiola believes Manchester City have to be “quicker and smarter” in the transfer market if they are to land targets in the future.

Frenkie De Jong was in discussions with the Premier League champions regarding a potential move before the highly-rated 21-year-old midfielder agreed to join Barcelona from Ajax in the summer for a fee of €75 million (£65m).

Guardiola understands the Dutchman’s desire to join his former club, but in general wants City to try to sign players earlier so that they are affordable.

“The transfer market, the salaries, increase a lot. After Neymar [moved to] PSG [for £200m] , prices increased to incredible levels. We have to be quicker and smarter, and try to buy the players.

“We have to adapt. It’s difficult to buy top, top players at a good price. It’s almost impossible. Maybe we have to trust in the young players [in the academy] and help them develop their own personality here.”

Guardiola has previously stated City would not pay £100 million for a holding midfielder to provide competition to Fernandinho – £60 million is the club’s record fee for Riyad Mahrez.

Speaking about De Jong’s move to Barça, Guardiola said: “I said many times – Barcelona and [Real] Madrid: it’s impossible to fight against them, for the prestige, the incredible league, the incredible clubs they are.

“The players have to take their own decisions. When they don’t want to come it’s because they want another place. There are other options, but we are going to try if we believe we need players in that position.”

If Barcelona and Real can also offer a higher salary, Guardiola is certain that having the correct pay structure is vital to maintaining team spirit.

“The reality is that it’s not just one or two teams paying a lot on wages. There are many. Many, many. Before the rumours was that it was just PSG and Manchester City. That is over. Everybody can pay a lot in fees and wages.

“It’s not just in England: it’s in Italy, in Spain, France. Maybe not in Germany. There are many and sometimes we can’t compete with that. We have to be quicker, faster and don’t get nervous. At the end of the day we want players who want to come here.”

Meanwhile Guardiola has dismissed as “fantasy” the prospect of Manchester City winning the quadruple. The champions, who are bidding to overhaul Liverpool’s four-point lead in the Premier League, remain in contention in the Champions League, FA Cup and Carabao Cup.

They secured their place in the final of the Carabao Cup on Wednesday, and their FA Cup quest resumes with a fourth-round visit from Burnley on Saturday.

Talk of winning all four was prevalent a year ago before City were beaten by Wigan in the FA Cup fifth round and, again, Guardiola stresses it is unlikely their challenge can continue on all four fronts. “We are able to try to win tomorrow — that’s all I can assure you. The other is fantasy.”

Guardiola left nothing to chance as his City thrashed Championship Rotherham 7-0 in the third round, three days before they hammered League One Buron 9-0 in their Carabao Cup semi-final first leg.

The latter victory enabled Guardiola to field a handful of youngsters in the second leg on Wednesday, but that will not be repeated as he goes all out for victory against Burnley.

“Always we try to make a strong team,” said Guardiola in his pre-match press conference.

“It is FA Cup against a Premier League side in Burnley. We are going to play with the best team we believe to win the game. “We now have everyone fit except Vinnie [Vincent Kompany]. The others are fit an everybody can play. Tomorrow we are not going to play any players from the academy.”

Burnley’s league campaign has not matched the heights of last season when Sean Dyche’s side finished a highly-creditable seventh. They have found themselves battling to stay out of the bottom three, and consequently the FA Cup is unlikely to be their top priority.

However, after a five-game unbeaten run, including four wins, form has improved, and Guardiola expects a testing encounter.

“When I hear that for Burnley the FA Cup is not top of the agenda – does it mean the 11 guys who are going to play at the Etihad Stadium won’t want to win? Don’t they want to try to go through? I don’t believe it. They are going to try to play.

“Finishing seventh in the league was an incredible achievement for them. They maybe didn’t start well, but I think they are five or six games in a row winning. I have a lot of respect for what they have done, and what they try to do.”

1 Sideline Cut: Vignette shows why Bird is the true shark in The Last Dance
2 Brendan Rodgers says he was ‘really knocked’ by coronavirus
3 Anfield and Cheltenham show sports again lacking in looking after their own
4 Farrell and O’Connell provide insight into changes in Ireland’s analysis
5 Andrew Porter diary: Meat, veg and intermittent fasting the order of the day
Real news has value SUBSCRIBE